Jim Loomis May 21, 2012 Amtrak, Congress, High-Speed Rail, Railroad Technology, Transportation & Politics 0 Comment
When I read about efforts by Republicans in Congress to reduce Amtrak’s pitifully small subsidy, or hear Mitt Romney promise to eliminate it entirely, I can’t help wondering what they’re thinking!
They sure as hell aren’t listening to their constituents, because all across the country, in any number of different areas, people – the traveling public – are demanding more rail service. 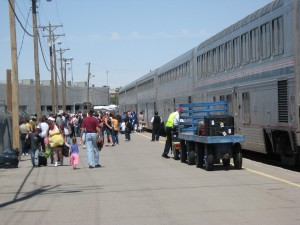 Public officials and community leaders in Mobile, Alabama, and numerous other communities across Florida’s panhandle, are pressing for the resumption of Amtrak’s Sunset Limited service east of New Orleans. It was “temporarily” discontinued as a result of damage to miles of track from Hurricane Katrina. The track has long since been repaired, but the Sunset still only runs between Los Angeles and New Orleans.
The slam-dunk feasibility of rail service linking Houston, Dallas and Austin has been talked about for years. It was killed some 20 years ago by heavy lobbying (meaning big-time political contributions) by Southwest Airlines, but the idea is back with renewed interest and enthusiasm.

And when the Federal Railroad Administration solicited proposals for high-speed rail projects, with $75 billion to divvy up to get them rolling, the agency received five hundred applications.

At the time, FRA administrator, Joe Szabo, csaid that “rising fuel prices have got people thinking differently about how they travel” and he noted that transit ridership has hit an all time high and he pointed specifically to a 212-percent increase in ridership on Amtrak’s Chicago-St. Louis route over the past five years as track improvements have shortened travel time between the two cities.

Given the obvious desire of America’s traveling public for more and better and faster trains, the continuing anti-rail and anti-Amtrak rhetoric from Republican candidates is hard to understand.

Previous Seeing the US in a Private Rail Car. Now That’s Doing It in Style!
NextAir Travel Indignities Continue to Pile Up