We Argue About High-Speed Rail in California …

… and they’re building the damn thing in Uzbekistan! Does anyone else see the irony, not to mention the absurdity, in that? 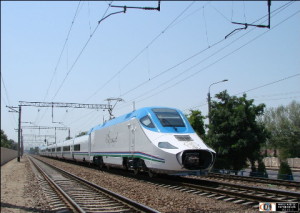 Uzbekistan Railways has bought two trainsets from the Spanish manufacturer, Talgo, and will put them into service on their first high-speed run (250 km/hr) between Tashkent and Samarkand.

Meanwhile, in the United States of America, we are continuing to hear shrill voices denouncing high-speed rail as “a boondoggle” and a waste of money, and proclaiming that people won’t ride it. Then, of course, they go on to remind us all that America is the greatest country in the world.

And that reminds me of another bit of insufferable arrogance that occurred last May when members of NARP* were visiting Congressional offices on Capitol Hill to urge support for rail and for Amtrak. One of our members was meeting with an aide to a Republican congressman from Alabama and was informing him how the U.S. was falling years behind even third world countries in rail transportation. At that point, the aide interrupted and said to our member, “If you’re going to continue running down America, we have nothing further to discuss.”

See? That’s what we’re up against. No wonder this country is in trouble.

Previous A Clear Message from Small Towns: “Don’t Mess with our Amtrak Service!”
NextOur Travel Options To Be Pinched Even More.