A Clear Message from Small Towns: “Don’t Mess with our Amtrak Service!”

I’ve been struck recently by the growing number of news stories about cities and towns in various parts of the country that are agitating for more or better or even new rail service. But by far the loudest agitation is coming from areas where existing service is threatened for one reason or another.

Take, for example, the possible rerouting of Amtrak’s Southwest Chief, which runs daily in both directions between Chicago and Los Angeles.

Most Amtrak trains run on track owned by one of the freight railroads and the Chief operates on track owned and maintained by the Burlington Northern Santa Fe. The trouble is, stretches of that track in Kansas, Colorado and New Mexico are not in great shape. Oh, it’s fine for slower freights, but not so good for Amtrak. And faster trains running over any given stretch of track mean that more maintenance is required. Not unreasonably, BNSF says they’ll be happy to maintain that track to the higher standard as long as someone else pays for it. 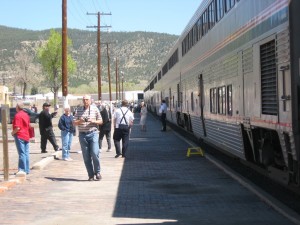 Passengers take a break as the Southwest Chief stops in Raton, New Mexico.

But that won’t be cheap. Amtrak figures that it will take something like $94 million the first year to bring the track up to their standards and as much as $11 million every year thereafter to keep it at that level. And that’s a swat for a railroad that’s being kept on near-starvation funding levels by Congress.

The alternative being considered is to reroute the train so it will be traveling over better track that will permit it to sustain higher average speeds. Trouble is, the minute that idea was floated, mayors and town councils of cities along the existing route rose up as one to oppose that option. The last I heard, a meeting of the concerned parties was being scheduled. Could the money be raised if everyone put something in the pot?

But isn’t this interesting: while members of Congress are whining about the paltry subsidy that Amtrak receives every year*, people in three states across small-town America are apparently ready to pony up the money needed to keep the bare-minimum train service they already have.

*Amtrak’s annual subsidy has been averaging about $1.5 billion a year. That’s just about exactly how much the U.S. gives away every year in foreign aid … just to Egypt!