Our Travel Options To Be Pinched Even More.

Comes now the news – hardly a surprise – that the nation’s airlines are slowly but surely cutting back on short-haul flights. That makes sense, of course, because a modern jet aircraft uses relatively little of that expensive jet fuel sailing along at 35,000 feet. Most of it is consumed on take-off and climbing to cruising altitude. Ergo: short trips = expensive trips. 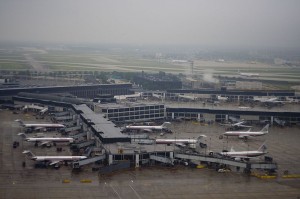 Last I heard, something like 30-percent of flights in and out of Chicago’s O’Hare involve destinations 400 miles away or less. Think of the environmental benefits if we could drastically reduce the number of short-haul flights in and out of our major airports! And then there’s all that imported oil we wouldn’t be using.

Well, gee … as we speak, all over Europe and Asia, high-speed trains are routinely running at speeds of 187 mph and up. I recently rode a Chinese train from Beijing to Shanghai and we topped out at 220 mph. Begging the question: Why can’t trains replace all those short-haul airplanes?

A high-speed train could take passengers from Dallas to Austin in an hour and 20 minutes … or from Cleveland to Chicago in just under two hours … or from downtown Chicago to Minneapolis in two hours flat. And in each case, you would leave from downtown and arrive in the center of the city. Try doing that, in those times, by plane! And you can also forget about the $30-$40 cab ride on each end.

So, with airlines in the U.S. cutting back on short-haul flights, we have just one more argument in favor of rail … specifically, high-speed rail.

Previous We Argue About High-Speed Rail in California …
NextMaui’s Weather – Something for Everyone.