Observations from the Great Hall in Union Station

During the Golden Age of train travel, Chicago’s Union Station was America’s most important rail hub, with passengers from almost everywhere connecting with trains going to just about anywhere.

The glory days of the Broadway Limited and the Super Chief and the Dixie Flyer may be long gone, but some 50,000 rail passengers still pass through this venerable station every day. Some are commuters heading home to one of Chicago’s outlying bedroom communities; others are hurrying to board one of Amtrak’s long-distance trains – the Empire Builder to Seattle, perhaps, or the California Zephyr, on its two-night journey to the San Francisco Bay area. 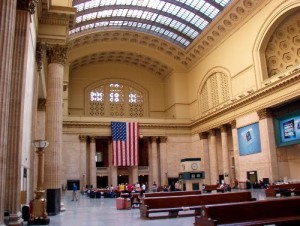 Last month, I had some time to kill before boarding the Pere Marquette and heading to Grand Rapids, Michigan, for a meeting of the National Association of Railroad Passengers and found myself absorbed with the constant flow of foot traffic passing my seat in the Great Hall of this magnificent old station. After a while, I begin jotting down some random observations:

· Regardless of age, men all pretty much look alike; just the shapes vary. And the haircuts.

· An airline pilot hurries past. It’s not the uniform that makes him look so dashing, it’s the cap.

· Some women, no matter how slim and stylish, simply cannot manage high heels.

· Western boots look absolutely fabulous on some women; ridiculous on others.

· And, on the subject of boots, several Amish families pass by dressed in their modest dark blue and black garments; straw hats on the men, demure bonnets on the women. The men wear practical black leather boots, but the women are all sporting the latest athletic footwear from Nike or Adidas.

· How does a bald Jewish man keep his yarmulke from slipping off?

· What prompts a 60ish overweight woman to get a tattoo of Tweety Bird on her upper arm? And why is it impossible to imagine that tattoo on a slim woman of the same age?

· Once in the station, 90% of the women push sunglasses up onto their foreheads; only 20% of the men do the same (none of the bald ones).

· With time to kill, older travelers tend to read or watch the passing parade; the younger ones are texting – some even as they hurry to their trains.

But the time passed and my train to Grand Rapids was boarding. I stood up, gathered my things and stepped out into the flow – each of us focused on our own coming or going, passing through the Great Hall of Chicago’s Union Station.

Previous About Those Hudson Bay Bears …and Their Future
NextComments (well, most of them) are still welcomed