About Those Hudson Bay Bears …and Their Future

This morning I drove out to the Churchill Northern Studies Center, some 20 kilometers out of town, where I had an appointment to meet with Michael Goodyear, executive director of the center. His facility is home to students and scholars and researchers with a common passion: learning more about this vast area and how to preserve it and the wildlife found here. 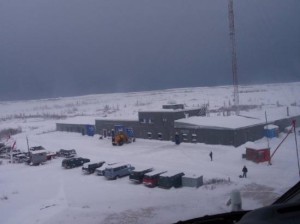 Goodyear is a 40ish, friendly man clad in what appears to be the standard uniform for these parts: flannel shirt, jeans and thick-soled boots. He offers me a cup of coffee and a seat, settles into a swivel chair and, after a few pleasantries, our conversation turns to the circumstances facing the area wildlife.

The main problem in a nutshell, says Goodyear, is global warming. He is emphatic: the planet is indeed warming and that is a fact beyond dispute. The only possible controversy, he says, is the extent to which the warming is “human driven.”

Whatever the cause, warming is having a discernable and quantifiable effect on the polar bears, who spend each winter out on the frozen surface of Hudson Bay hunting their main source of food, the ringed seal. The bay, he says, is freezing later and thawing earlier than ever before, allowing less time for the bears to fatten up on seals. That, in turn, means bears gain less weight over the winters and they are therefore less prepared for what amounts to their summer-long fast. 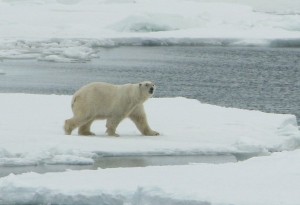 Goodyear says hard numbers confirm the impact the change in climate conditions has had on the bears. There are now 934 polar bears in the area, and that’s a decline of 22 percent over the past 20 years.

But can’t the bears simply move farther north to areas where the bay freezes earlier and thaws later in the Spring? Certainly, he says, but there are already other bears north of here, and any given habitat can only sustain a finite number of animals, whether bears or foxes or lemmings.

I ask him what his prediction is for the future of these polar bears. He shifts uncomfortably in his chair and stares out the window for a moment. “I’m an optimist,” he says finally, “so I’ll give you my most optimistic prediction. It is this: in 50 years the polar bears will be gone from the western Hudson Bay area.”

Thirty minutes later, I’m back in my rental car, bouncing over the dirt road on the way back into Churchill. I was warned to be alert for bears during this drive, and I keep my eyes open. After another half hour, I pull up in front of my little bed and breakfast.

Previous More About Churchill’s Polar Bears – Hungry Ones!
NextObservations from the Great Hall in Union Station