Meet the Other Jim Loomis.

There aren’t a lot of Loomises—certainly not in comparison to people with names tied to occupations such as Cooper or Baker or Brewer—but pick up almost any phonebook for any town of reasonable size across the country and there will be a Loomis or two listed.

The first printer in the Hawaiian Islands was Elisha Loomis who showed up in Honolulu in 1820, and the Loomis Armored company has been here for a while. I’m often asked by clerks in the supermarket check-out line or when picking up dry cleaning if I’m the guy who owns the armored cars. My standard get-a-laugh response is, “If all those armored trucks were mine, I’d have someone running this errand for me.”

I lived on Oahu for 40 years and there were a couple of other Loomises there— Rosalie Loomis, who was a prominent realtor, and a lady named Edie Loomis worked for the Hawaii Visitors Bureau for quite a long time. But then I retired and moved to Maui and to my surprise there was not only another Jim Loomis living here, but we’re very close to the same age and live literally within a half-mile of each other. 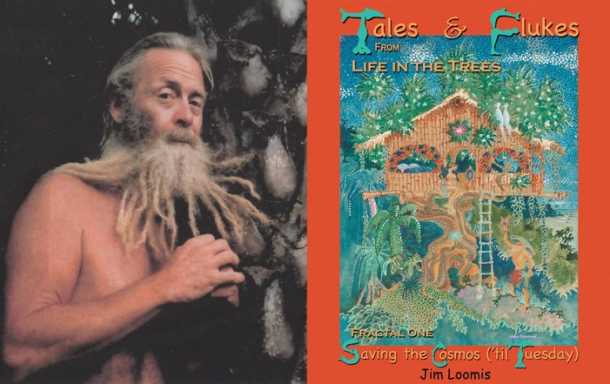 He’s a bonafide expert in a number of areas including marine mammals, and he has written several books, the latest of which is titled Tales and Flukes from Life in the Trees. It’s subtitled: Saving the Cosmos (’til Tuesday).

In the early 1970s, he up and quit his job as a math teacher at a prestigious California school and moved to Maui. He obtained some land in Huelo, still a sparsely-populated part of the windward shore, where he built a tree house in which he lived happily for many years unbeknownst to building inspectors. Photos of The-Other-Jim-Loomis from that era show a near-naked man with an absolutely superb physique.

For the first several years of my time here on Maui, I would get occasional long-distance phone calls intended for The-Other-Jim-Loomis—usually, it seemed, from worried mothers trying to contact daughters supposedly camping out beneath his tree house.

Jim’s health isn’t so good these days. He had a medical scare a while ago and occasionally has trouble speaking clearly, but he remains irrepressibly cheerful, and is usually seen clad in a kind of hap-hazard pirate regalia, complete with a two-foot long feather plume waving jauntily in his tri-corn hat and his long blond beard in dreadlocks. You really can’t miss him.

It’s taken a while, but I think I finally got The-Other-Jim-Loomis figured out and it turned out to be quite uncomplicated: he decided all those years ago to leave the rat race, come to Maui, and spend the rest of his time on earth in a joyful celebration of life … and, in that regard at the very least, he is an object lesson for all of us.

Previous My Trans-Siberian Experience Revisited.
NextIt’s Nice To Be More Than Just a Constituent.