I’ve been fighting a bug for the past several days and it’s messed up my sleep routine, meaning I’ve spent a fair amount of time staring at the ceiling. So last night, in the wee hours, I got up, turned on the computer and spent some time going through some of the photos I took in 2011 on the Trans-Siberian ride from Moscow to Beijing by way of Mongolia.

It was the proverbial trip-of-a-lifetime, of course, but as I was clicking through the photos, what I remember—strangely—was that I don’t remember thinking at the time that it was such an extraordinary experience. I think it’s because, when you’re actually there, you’re surrounded by all the ordinary things that are part of people’s ordinary lives everywhere: some guy picking up trash, a mother changing a baby’s diaper, two old men playing chess on a park bench. 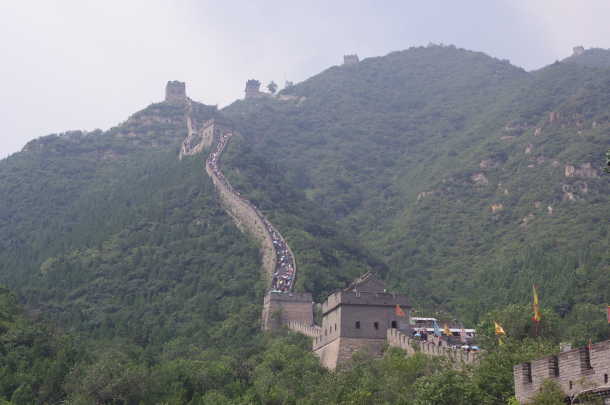 One thing really stands out still as a Very-Big-Wow moment: The Great Wall. It’s staggering in its size … and then you remember that the damn thing is 4,000 miles long. And, yes, the industrial haze is absolutely awful.

Standing with one foot in Asia, the other in Europe … that was a unique experience, although it was an hour-long bus ride to get there, the photos took ten minutes, then another hour by bus to get back. That’s me at the top row … wearing the Red Sox cap.

Another unique experience: In the photo below, it’s just after sunrise on the Gobi Desert. We had stopped to wait for another train coming from the opposite direction. While we were waiting there, an old Mongolian man came along with a couple of camels and cheerfully gave a young girl a short ride on one of the beasts. Proving yet again, there are nice people everywhere.