The big attraction Churchill holds for visitors, of course, is the polar bears. For a couple of months, beginning sometime in October, the town is full of people from all over the world and they are here for the bears.

They — the bears — are found all over the general area, waiting for Hudson Bay to freeze over so they can go out on the ice and hunt the ringed seal, their main source of food. 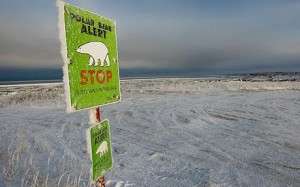 It’s not uncommon for a bear to wander into town. They are, after all, afraid of nothing and no one. Many of the locals carry “crackers”, which explode and sound like a gun shot. The crackers are used, of course, to encourage the bears to head back out onto the tundra. Nevertheless, visitors are warned to be alert if walking around town at night.

Indeed, they are not kidding. On each of the two nights I was there, I heard crackers exploding. But no need to worry, I was assured. Over the years, only two people have been killed by bears in the town.

One was a notorious drunk who had broken into a grocery store and stolen a dozen or so packages of fresh meat. As luck would have it, upon leaving the scene of his crime, he encountered a bear. The animal might conceivably have chosen to avoid the guy were it not for all that fresh meat, which he had stuffed inside his parka – safely hidden from law enforcement, perhaps, but not the bear, who made short work of both the stolen meat and the town drunk.

The other fatality occurred when a group of teenagers came across a bear that had wandered into town and began pelting the animal with snowballs. The bear, apparently lacking a sense of humor, took exception to the game. The kids scattered in every direction and all but one got away … the one the bear chose to pursue when they broke and ran. Talk about the luck of the draw!

More to come: What does the future hold for the polar bears of Churchill?