Out Onto the Tundra … In Search of Polar Bears

It began snowing sometime before dawn this morning and by the time I’m picked up in front of the Bluesky Bed & Sled there are 3-4 inches on the ground. Even at 7:45, it’s still dark. I’m the last to board the bus, which has already collected two dozen or so people from hotels and other B&B’s around town … all of us expecting to see polar bears. 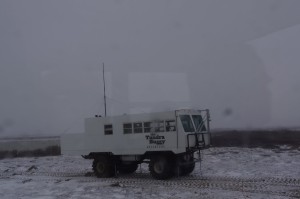 For 30 minutes the bus rumbles along a dirt road until finally reaching a staging areas for the tundra buggies, ponderous over-sized vehicles with huge tires that are ideal for hauling visitors along what pass for roads through the tundra — ruts and bumps alternating with low spots filled with as much as three feet of icy water, already turning to gray slush as the temperature continues to fall.

Operating our tundra-buggy is a garrulous character named Mac, who keeps up a steady patter — interesting information about the tundra and the wildlife found here: both red and the arctic foxes, ptarmigan, an assortment of other birds including huge ravens, and, of course, polar bears. 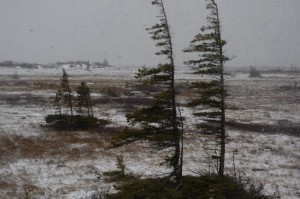 By now the visibility has worsened and the snow is four of five inches deep. Mac says that will help us spot the bears. After spending the past six or seven months on land, their coats will no longer be stark white and they will stand out against the snow.

Twenty minutes later, the buggy jolts to a stop and Mac turns to face us. “Now it would be a good idea if we all remained nice and quiet,” he says. And he points directly in front of us. 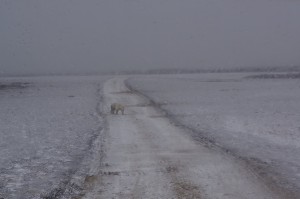 Sure enough, a dusky polar bear is ambling across the rutty road in front of us, swaying side-to-side as he approaches, peering at our huge buggy through the blowing snow. Passengers crowd against the windows and begin snapping pictures. As the bear strolls alongside the buggy, I push through the door out onto the open platform at the rear, right into the teeth of the icy wind. My fingers stiffen and start turning numb. No matter. When I look over the side, the bear is right in front of me. 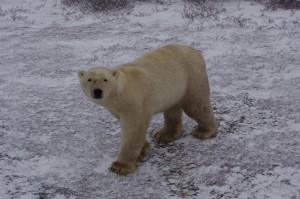 I snap the photo and peer at the little monitor on the back of the digital camera. There he is … I got him … my bear … and he’s staring right into my lens.

He circles the vehicle, looking up at the people crowding against the windows, then, clearly losing interest, wanders off into the scrubby willow underbrush, flops down into the snow, stretches and, for all the world, appears to go to sleep. After waiting a minute or two, we move on.

We come across more bears during the rest of the afternoon, including two young males who entertain us for well over a half hour as they roll and tussle and chase each other in circles.

“Just a couple of 800 pound puppies,” says Mac. “But step outside, and those cute little guys would literally have you for lunch.”

Soon the light begins to fail and we head back to the staging area and transfer into the bus for the 20 minute ride back into Churchill. As we ride through the gathering dusk, I take out my camera and sneak another look at the photo of my bear. He’s still there. Looking right at me.

Previous The Running of the … Dogs, in Churchill
NextMore About Churchill’s Polar Bears – Hungry Ones!