What the Hell Were They Thinking?? 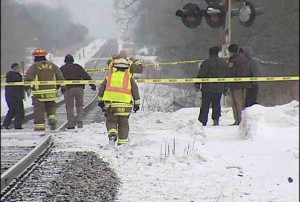 There has been a rash of accidents lately involving individuals being hit by trains while walking on or near — make that too near — railroad tracks. Some of these incidents could well have been suicides, but it appears that most were the result of carelessness. (Like grade crossing accidents involving motor vehicles, these incidents are all avoidable. Every damn one.)

In several of these cases, investigators have determined that the victims were either listening to music and wearing ear buds or talking on a cell phone while walking on the tracks. In one incident, a 15-year-old boy tried to run across the tracks ahead of the train. He didn’t make it.
Obviously, these accidents have a terrible impact on the families of the victims. But, as I have written here before, the engineers involved are also victims. They see the person ahead of them on the tracks, they blow the whistle frantically, and they go into an emergency stop. But most of the time it does no good and they helplessly watch someone die. Some never recover from the experience.
Amtrak and the freight railroads, working with Operation Lifesaver, have launched an awareness campaign in an effort to cut down on these senseless deaths. Operation Lifesaver has dramatically reduced the number of grade crossing accidents involving motor vehicles. Let’s hope the new campaign works, too.

Previous Dealing With the Anti-Amtrak Stories – Again!
NextRule Number One: Don’t Be a Jerk. Rule Number Two: Don’t Mess With the Conductor.