Dealing With the Anti-Amtrak Stories – Again!

Having traveled by train a great deal over the past couple of decades, it distresses me to read criticisms of Amtrak by newspaper and magazine columnists that are based on ideology or misinformation.

Some of these people get their shorts in a knot because Amtrak operates in the red and receives some government subsidy. Of course it does! And so does every national passenger rail system in the world. The fact is, every form of public transportation is subsidized by government, from the airlines to sidewalks.

Amtrak gets roughly $1.5 billion a year in subsidy from the federal government. But, as we speak, the government is spending $5 billion — that’s billion, with a “B” — for one new runway at Miami International Airport. So why the outrage over a comparatively modest subsidy for Amtrak which, by the way, generates revenue that covers 80% of it’s operating costs, a record that is better than any other national passenger rail system in the world. 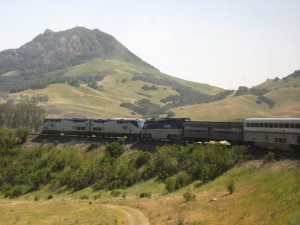 (Above) The southbound Coast Starlight winding through the California hills and starting its descent into San Luis Obispo.

The other complaint we hear is that Amtrak trains constantly run late. There is a basis of truth to that, but the grumbling writers are pointing their fingers in the wrong direction. The fact is, 95 percent of the time the fault is with the freight railroads over whose tracks Amtrak trains are running. It has been common practice — Union Pacific has been the habitual and by far the worst offender — for freight railroad dispatchers to delay Amtrak trains and give preference to their own trains, despite a federal mandate to the contrary. That said, the post-Bush feds have cracked down and most Amtrak trains are now running at or close to on time. For example, I just checked the on-time performance of Amtrak’s northbound Coast Starlight, which operates daily from Los Angeles to Seattle. Guess what: that train has arrived an average of 18 minutes early over the past 30 days.

This is not to say that there isn’t a lot of room for improvement in the service Amtrak provides. But most of Amtrak’s problems over the past decade can be attributed to the Bush Administration’s policy of doing their best to starve Amtrak to death with less-than-bare-minimum subsidies. One year, in fact, the Bush budget contain zero-zip-nada for America’s only nationwide passenger rail system. If Congress hadn’t interceded and provided the money, Amtrak would have had to shut down. How’s that for an enlightened transportation policy? At one point about a year ago, and in the face of steadily increasing ridership, Amtrak had more than 100 rail cars in storage because they didn’t have the funds to perform routine maintenance or make minor repairs. Is it any wonder that Amtrak was hard pressed to hold it all together during those times?

The reality is that most of these criticisms appear to come from people who have never ridden on Amtrak. My wish would be that they give one of Amtrak’s long-distance trains a try … the northbound Coast Starlight out of Los Angeles would be a great way to start. They can relax in the parlor car during a wine tasting. Have a steak for dinner in the dining car. Look out the left side of the train the next morning for a fabulous view of Mount Shasta. And sit on the right side after lunch for a continuing vista of lakes and valleys as the train follows a single track through the Cascades on the way into Seattle. Is there a better way to travel … or to see America? Not in my book!

Previous Shopping carts? Good Heavens! What Next?
NextWhat the Hell Were They Thinking??