Rule Number One: Don’t Be a Jerk. Rule Number Two: Don’t Mess With the Conductor.

A few days ago there was a news item about an Amtrak conductor who was conked on the head by a wine-bottle wielding passenger on a train in the Bay Area. Fortunately — in order of importance — the conductor was not seriously injured (although he did require stitches) and the boozed-up jerk who hit him was caught and will hopefully spend some time in the slammer.

This did bring to mind an interesting conversation I had with another conductor late one night on one of my long-distance train rides. We had gotten around to the subject of problem passengers — typically people having too much to drink in the lounge car — and how they should be handled. 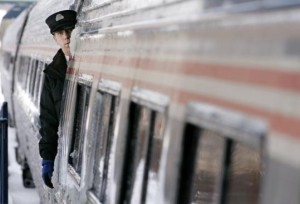 “They get one firm, but pleasant warning: knock it off or I’ll put you off the train,” said the conductor. “If they keep on making trouble, the next stop will be theirs, no matter what their real destination might be.”

He went on to say that the secret is to never let the trouble-maker know that he’s going to be put off the train. That invariably leads to big trouble, especially if he (or she) has had too much to drink. In the textbook case, the conductor alerts the engineer who contacts the dispatcher who in turn calls the police somewhere up ahead of the train’s location. When train comes to a stop at the next station — in serious situations, that could even be where a highway crosses the tracks — two state troopers come aboard, and before the problem passenger has time to react, he’s standing on the platform watching his train rumbling off down the track without him.

As he was describing all this, I remember the conductor grinning. “It doesn’t go that far very often, but when it does, the guy has been a real jerk and other passengers have been affected. The truth is, I just enjoy the hell out of it.”

Previous What the Hell Were They Thinking??
NextSmart and Dumb … And All At the Same Time