They May Be Doin’ It Right, But That Don’t Mean We Is Wrong!

High-speed rail lines are being opened and expanded all over the world. France, with its TGV network, has been the acknowledged leader for several decades, but other countries are rapidly catching up, the most notable being Spain which has now linked all major cities with a high-speed rail system.

In China, trains on the high-speed rail line linking Beijing and Tianjin are among the fastest in the world, running at speeds up to 218 miles per hour. 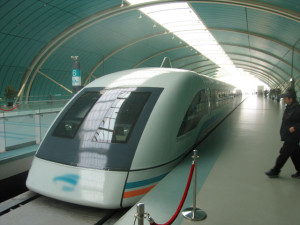 The Chinese have also announced they will be increasing the operating hours for the maglev (magnetic-levitation) train that is running daily between downtown Shanghai and the airport. This futuristic train reaches a speed of some 210 mph and averages 157 mph on the short 18 mile run. In tests, the maglev train has reached a speed of 310 mph.

But here’s what’s interesting about all this: China’s airlines are seriously worried that the country’s determined push to develop the world’s largest high-speed rail network could actually cause them to suspend service on most of their domestic routes.

Here in this country, we’ve just started to talk about high-speed rail linking a few of our major cities. But we continue to plow billions and billions of dollars into more highways, expanding airports, and creating a new air traffic control system to permit more planes in the air flying closer together.

But a nationwide system of passenger trains for the U.S.? Well, shucks … we ain’t gonna pay no ‘tention to all them Frenchies and Spanish people, and ‘specially t’ them Chinesies! Dagnabbit, America has always knowed how to do things better than all them dang furriners!

Previous Flying With a Very Large Problem
NextThe perfect Christmas gift … for YOU!