Flying With a Very Large Problem

At one time or another, we’ve all found ourselves on a long flight seated next to someone who could be described as “circumferencly challenged.” I once spent five hours sitting next to an overweight woman who extended far enough into my space that I was forced to eat my meager meal left-handed.

But THIS is ridiculous! 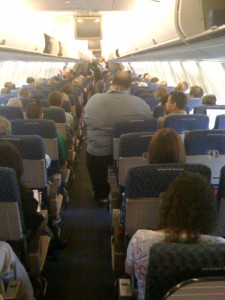 This photo — now circulating on the Internet — was apparently taken with a cell phone camera by an American Airlines flight attendant to convince a disbelieving gate agent that something had to be done about this behemoth. Apparently one look was enough and they relocated the poor guy in Seat E, giving Man Mountain Dean two seats to spread out in.

As a practical matter, how else would the flight attendants run their service carts up and down the aisles?

And let’s hope whoever was stuck in Seat F didn’t need to make a trip to the lavatory!

But there are other, more serious, considerations:

What would happen if – God forbid – there had been some kind of an emergency? Can you imagine a mad scramble to evacuate the plane with this guy part of the exodus?

Some airlines are requiring king-size folks to purchase two seats. That strikes me as absolutely fair and reasonable, although it doesn’t begin to deal with the safety issue.

I suppose a case could be made for prohibiting someone this large from flying at all … or, barring that, assigning them to two seats in the very last row.

Of course, Amtrak could be a very good alternative. This guy couldn’t fit through the doorway of one of the bedrooms, but could ride quite comfortably in two coach seats.

Or the baggage car.

Previous We Finally Get a Peek at the REAL Cost of Roads
NextThey May Be Doin’ It Right, But That Don’t Mean We Is Wrong!