More than one member of a train’s on board crew has told me that the key to the job is flexibility … being able to cope with unexpected and unusual occurrences. An Amtrak car attendant on one of my train trips put it quite succinctly: “If you can’t roll with the punches, you’d better find another line of work.”

Some time ago – probably more than 10 years, actually – I was on the Coast Starlight, heading from Los Angeles up to Seattle. About the time the sun was going down, the dining car steward announced over the train’s PA system that there had been a power failure in the diner. Uh-oh … a couple of hundred people expecting a nice dinner and the ovens weren’t working.

But not to worry. 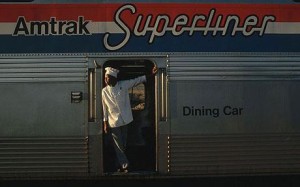 At the next stop, the steward hopped off the train and dashed into the station where I could see him making a phone call. An hour or so later, when we pulled into Salinas, there was a van waiting for us. As we rolled to a stop, two kids hopped out of the van and began handing dozens of small boxes through the lower-level door of the dining car to the chef and the steward. A couple of minutes later the steward came on the public address system. “Folks,” he said cheerfully, “the Colonel has just paid us a visit and dinner tonight there will be Kentucky Fried Chicken with all the trimmings for everybody.” Applause rippled throughout the train.

Ever since, I’ve had fun picturing a 20-year-old assistant manager of a KFC store picking up the take-out phone and hearing someone say they needed 200 chicken dinners to go in 45 minutes. Sounds like a perfect routine for Bob Newhart or Bill Cosby, doesn’t it: “Yeah, right. Who is this really?

Previous Where Have All the Giants Gone?
NextI’m Off Again … This Time Heading East