Where Have All the Giants Gone?

Many of us who have worked with and around print and broadcast reporters over the years continue to be distressed at the decline of good, serious journalism that has occurred in the last 15 or 20 years.

Television in particular has steadily lowered its standards in response to the axiom espoused by the consultants: “If it bleeds, it leads.” And so we suffer through TV newscasts that present a highway accident as the most important thing we need to know today.

On the radio, we get “newscasts” that are a pitiful 60 seconds long and squeezed into breaks between hour-long rants by blowhards like Rush Limbaugh and Glen Beck and Lou Dobbs.

Newspaper circulations are dwindling because more and more people are getting their news “free” from the internet and won’t cough up 50 cents a day for their local newspaper. Of course, the news people get from Google and Yahoo comes from newspapers and pretty soon those newspapers won’t have the money to pay the reporters to gather it. Then what? 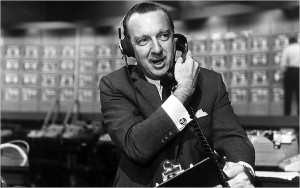 All that brings to mind the passing of Walter Cronkite, whose one-of-a-kind stature as a journalist with CBS News was respected and acknowledged by public and peer alike.

I just got an email from my son who has a teleprompter business in Southern California. About ten years ago, as part of the crew producing a special on immigration for the Discovery Channel, he experienced both the professional and the human sides of Walter Cronkite. The crew had assembled on a cold, wet day at the Mexican border where they would tape Cronkite doing a number of stand-ups that would later be edited into the program.

Here’s what my son wrote:

In the midst of the cold weather, a small craft services table is set up [with] some donuts and coffee set out for the crew. … So the vehicle pulls up and Walter and some other people climb out… Somebody leads Walter over to the small craft services table and says “Mr. Cronkite, if you’d like we have some coffee here and some donuts.” … This giant of television journalism surveys the modest spread, glances kindly over to where the crew is standing by and … inquires: “Has the CREW had some yet?”

And that, folks, is real class.