An Ill Wind Blows on the Zephyr, But All Ends Well

I’ve just left Amtrak‘s California Zephyr at Davis, California, after a fine ride from Chicago. The equipment was in good shape and the crew was excellent … at least that’s true of the car attendant in my sleeper: personable, outgoing, on the ball, and right there whenever anyone needed him.

The first pleasant surprise occurred in Denver where the windows on the train were washed! I can’t remember that ever happening before. First came a guy with a soapy wet long-handled mop, followed immediately by another guy with a squeegie. I have no idea if this is a regular feature, but on what I think is probably Amtrak’s most scenic route, it’s a great idea and very welcome.

Ah, but the best laid plans …

Late yesterday afternoon, as we were sitting in Grand Junction, Colorado — just east of the Nevada border) –it rained just enough to wet down the cars. But then the wind picked up and blew dust everywhere, leaving our nice clean windows a streaky brown mess. Not a happy situation with a full 24 hours left on board. 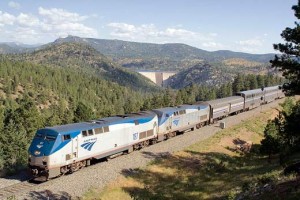 But this morning we woke up to sparkling clean windows! I was sound asleep, but a fellow passenger said it had rained like hell for about 20 minutes an hour or so after we had left Salt Lake City. Thank goodness, because that two hour stretch after the Zephyr leaves Reno — through Truckee and up and across the Sierras by way of Donner Pass — is probably the most spectacular scenery offered on any of Amtrak’s routes.
One other note regarding on board service: There were only two people serving in the dining car, and it ain’t enough! Furthermore, as far as I could tell, there was only one chef working in the galley down below. They all did the best they could, but meals — particularly dinners — took quite a long time. No one is in a rush on a leisurely long-distance train ride, but my dinner meal last night took two hours from the time a sat down. Fortunately, the luck of the draw provided me with some very interesting dinner companions, but it would have been a real ordeal if that had not been the case.
That said, it was nevertheless a very good trip.
Help! Does anyone know why this damn program sometimes doesn’t recognize paragraphs?? I have tried several times to add a space between these last three paragraphs but blogspot will not let me do it. Any advice will be much appreciated.