A Very Good Day On The Hill 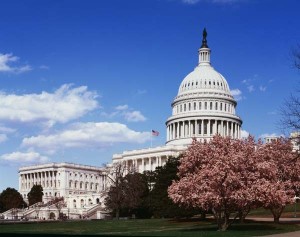 Along with other members of the NARP* Council of Representatives, I spent most of the day today visiting the offices of several Members of Congress, banging the drum for passenger rail in the U. S.

What an interesting time! Without exception, the representatives or senators — or their legislative aides — were very receptive. And all were very much aware of the dramatic turn-around by the federal government with respect to rail, made clear to all by President Obama’s dramatic commitment to both high-speed rail and Amtrak in his speech last week. So there is reason, after eight dismal years, for real optimism.

However … money is tight and there is still no long-term commitment. So one of our requests was that serious consideration be given to some permanent, dedicated source of income be considered for rail in the same way that the federal gas tax provides funding for highways. Until that happens, Amtrak will find itself existing at the whim of whoever is president and in the Congress, and dealing with the same old problem of not knowing from year to year what their budget will be.

Nevertheless there is indeed reason for real optimism!

I’m off again tomorrow … this time overnight to Chicago on Amtrak’s Cardinal. I’ll be connecting to another train there and spending a night with my brother near Galesburg, Illinois. The following day, I’ll catch the California Zephyr for the two-night trip to the West Coast. I’ll report again from there.

Finally, a quick word about Washington, DC: This is a fabulous city and a must-see for every American. The government buildings, the museums, the restaurants … this is where it’s happenin’, baby! And come by train so you will not miss the glorious Union Station … almost worth the trip all by itself

*National Association of Railroad Passengers. Please consider becoming a member. Go here to find out about the organization and go here to join.