The Democratic Party’s convention in Denver concluded with a crowd estimated at some 85,000 people gathered in the open-air football stadium used by the Denver Broncos. 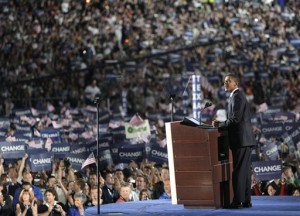 It was a key moment in the Obama campaign, of course, because it gave both Barak Obama and Joe Biden a chance to be seen and heard by a nationwide audience the TV ratings people now say totaled almost 40 million people.

But it turns out that some people were hoping the big spectacle would be a flop. If fact, they were praying it would be a flop. A right-wing “Christian” organization (quote marks are mine), Focus on the Family, actually put out a video asking their members to pray for “rain of biblical proportions” to ruin the Obama event.

Well, God, in His infinite wisdom, answered their prayers.