In Search of Shoeless Joe – Part 2

The Lansing family has owned this farm for a hundred years. Don Lansing, born and raised in Dyersville and the current owner of the property, surveys the activity going on all around him and smiles. “Pretty typical for a summer day,” he says.

Lansing has long since become accustomed to having people around his place most of the time, but he still shakes his head when he talks about the knock on his front door during the winter of 1987 that changed his life.

“There was snow on the ground,” he says. “It was a lady from Dubuque. The Iowa Film Office hired her to look for a farm with a two-story house that would be right for a movie.”

Dozens of farms in several counties were considered and there were three or four more visits to the Lansing farm over the next few months before it made the final cut. And how did Lansing feel when he got the news? “It was an honor to have my farm chosen,” he says simply. 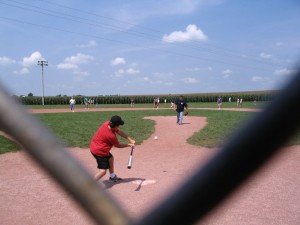 Once the final decision had been made, things happened fast. The baseball field was finished within a matter of days. A crew of carpenters descended on the 100-year-old farmhouse and began remodeling the interior, all under Don Lansing’s watchful eye. A new stairway to the second floor was installed and several walls on the first floor were knocked out to give cameras more room to follow Kevin Costner and other cast members as they moved from kitchen to living room and back.

Outside there was another problem, one that couldn’t be fixed with hammer and nails. There was very little rain during that spring and summer in 1988, and by late May the film’s producers were starting to worry.

“They came to me saying the corn wasn’t tall enough,” Lansing says. “I told them, ‘Well, it’s the drought.’ So we dammed up the stream over there and pumped water on the corn around the outfield until it was tall enough so the actors could go in and out.” He stares out at the cornfield, remembering. “That was a real dry summer.” Then he brightens. “But we’ve had rain every year since.”

The filming was completed on the 15th of August. Almost 18 years later to the day, as we sit and chat on the same porch swing seen in the movie, a man and woman hesitantly approach the white picket fence that separates the house from the baseball field. The man calls out. “Are you Mr. Lansing?” 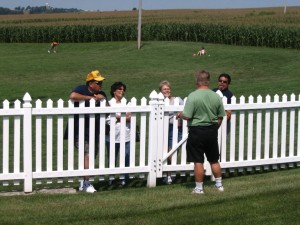 Lansing gets up off the swing and walks across the lawn to the picket fence. “Yes, I am.”

“I’d just like to thank you for keeping all this going,” the man says. Then he adds, almost sheepishly, “This is my sixth visit here.”

Lansing nods, clearly not surprised. “What keeps you coming back?”

The man pauses, glances at his wife, then shakes his head. “I really don’t know,” he says.

They politely ask for and get permission to take Don Lansing’s photo, thank him again and head back to the field where their son is shagging balls in the outfield