A Hawaiian Lei for Judy

Along with millions of other folks, we’ve been following a lot of the Democratic National Convention on PBS over the past several nights. 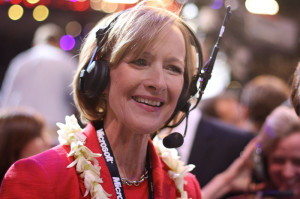 Perhaps you noticed that Judy Woodruff was wearing an orchid lei during her reports from the convention floor the other night. It was presented to her by someone in the Hawaii delegation shortly before Judy interviewed a member of the group. It suits her, don’t you think?