In Search of Shoeless Joe – Part 3

Don Lansing maintains the diamond himself and pays for the cost of its upkeep with proceeds from the sale of caps, T-shirts and other Field of Dreams items at a busy souvenir stand.

The community of Dyersville has also benefited from all the activity generated by the ball field on Don Lansing’s farm. Two new motels have sprung up in recent years and the ripple affect has been a boon for the local restaurants, gas stations and other retailers. 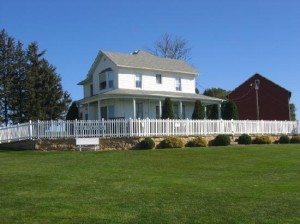 Once again our conversation is interrupted, this time by two couples who approach the fence and politely ask to have their photos taken with the farm house in the background. Lansing says that would be fine and ends up taking the pictures for them. One of the two men asks Lansing for an autograph, then fumbles awkwardly through his wife’s purse for a pen and any scrap of paper. Lansing scribbles his name and the man thanks him profusely.

“No problem,” says Lansing. “Thanks for coming by.”

“It was an honor,” the man said, and all four back away down the grassy slope, almost like courtiers withdrawing from a monarch’s presence.

A tour bus comes slowly down the driveway, stops and two-dozen people begin climbing out. There are a lot more people here now than there were an hour ago.

Because there is no admission charged at the Field of Dreams, no one knows for sure how many visitors come here every year. But from the number of names in the guest book he has placed on a stand behind the backstop, Lansing estimates that 60,000 people visited last year alone. What’s more, he says the number of visitors is actually increasing every year.

The people in the tour group drift over to watch the activity on the baseball field where a whole new line of youngsters is now waiting to bat. Kids and adults both are scattered around the field fielding balls and tossing them back into the infield. There’s no yelling, no horseplay. And, as Don Lansing points out, there’s not a speck of trash anywhere in sight. 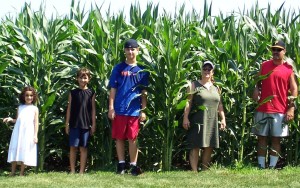 “If all this was a problem, I’d give it up in a New York minute,” he says. “But everyone respects the place. They just figure it’s their own little piece of heaven.”

Well, no, it’s Iowa … but there’s a 10-year-old about to step up to the plate who would almost certainly disagree.

And, on this particular day, so would I.