On Behalf of the Lowly Campaign Worker

A Little-Known Fact: The political campaign tactic known as “sign waving” actually started here in Hawaii, probably 30 years go. Candidates with little or no name recognition would stand at intersections during rush hour with their names on a sign and wave at the passing motorists. One elderly Hawaiian gentleman, a perennial candidate, greeted drivers during the morning rush hour from an aluminum lawn chair perched on the back of his battered pickup truck. On more than one occasion, he had dozed off by the time I went by. 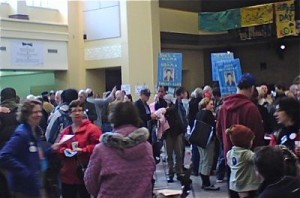 His laid back approach was atypical, however, and folks who have never been involved in a political campaign can’t begin to appreciate how much work it is, whether the race is for a seat on the town council or for President of the United States.

That said, it’s also true that no single campaign activity is worth the effort that goes into it. You have to do it anyway, however, because your opponent is doing it. If he or she knocked on Mr. Smith’s door and you didn’t, guess who’ll probably get the Smith family vote! 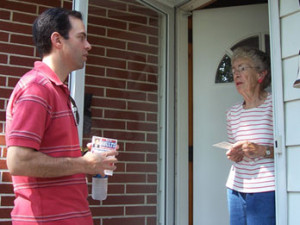 Door-to-door canvassing is hard work and is not without its perils. Many campaigns ago, I was working my way through a residential neighborhood in Honolulu, passing out brochures for our former mayor, Frank Fasi. I had just started walking down a short driveway when an ugly black dog emerged from under a bush in the far corner of the yard and started coming at me. A long chain was fastened to his collar and I figured that any second he would reach the end and be pulled up short. A logical thought, but unfortunately the other end of the chain wasn’t fastened to anything. That damn dog dragged his chain all the way across the yard and nipped my okole … my butt!

Anyway, my only point here is to suggest that when campaign volunteers come a-knocking at our doors or call us on the phone, let’s remember that this is our democracy at work and at its best. No matter who their candidate may be, treat these folks with a modicum of patience and respect, OK?

And make sure the dog is tied up.

Previous In Search of Shoeless Joe – Part 3
NextAnother Sign of the Economic Times?