I think we all tend to overlook the fact that Amtrak has an extensive bus system that takes people from out-of-the way towns to larger towns and cities with Amtrak stations. Buses are also pressed into service whenever one of the trains cannot make its normal scheduled run. 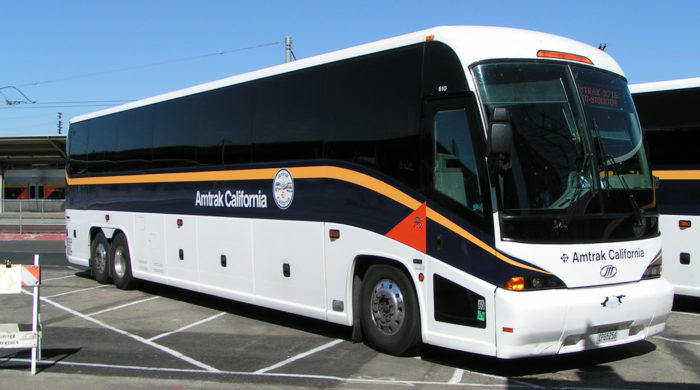 Yesterday I received an email from John Gilbertson of Sparks, NV. He planned out an interesting itinerary from Sparks to Los Angeles and back using mostly Amtrak buses and the San Joaquin trains. The westbound California Zephyr took him through Truckee and over Donner Pass to Sacramento where he boarded a bus headed for Stockton, California. He arrived there in time to catch another San Joaquin train (#714) to Bakersfield, where they connected to another Amtrak bus that took him to Los Angeles. Total elapsed time—Sparks, Nevada, to LA: 13 hours and 45 minutes.

Two days later, John made the return trip, starting with a bus leaving Union Station in L.A. for Bakersfield at 3:00 a.m. (John says in his email that there had been a later bus scheduled to depart LAUS at 8:00 a.m., but it had been cancelled.) Clearly, the kind of guy who looks on the bright side, John noted that they encountered very little traffic at 2:00 a.m.) The return trip went smoothly and he was back in Sparks at 4:00.

The next time you’re on line, check a few of the timetables for the long-distance trains. Specifically, take note of how many cities and towns are served by an Amtrak bus, taking people to a railroad station, sometimes from several hundred miles away. In many ways, it’s the Amtrak bus system that brings mobility to literally million of Americans in almost every part of the country. It’s actually quite impressive.