Come to Hawaii and Go to a Real Luau … If You Can Find One. 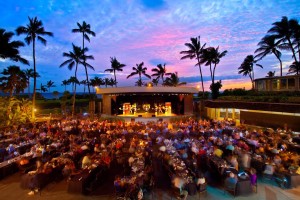 Many of the people who visit Hawaii want to attend a luau. There are several on most of the islands and they all feature the traditional foods – kalua pig, lomilomi salmon, sweet potato, laulau … and poi, of course. And it all comes with singers and dancers to provide a smattering of the music we all love.
It’s fun and the visitors enjoy it.  But the real luaus are much more informal.
Some years back, when I was still living on Oahu, the folks in my office organized a weekend-long picnic and camp out in a city park that was kind of off the beaten path. We all chipped in for the pig and everyone brought a couple of extra dishes. To supervise the cooking of the pig in the imu, the underground oven, we recruited a cheerful 20-something Hawaiian kid who worked for the City Road Division.
One of our group brought a relative from the Chicago area, who was a professor of anthropology. Of course, he was fascinated with the whole thing, especially the cooking of the pig, and he latched onto the kid in charge, asking questions and taking notes.
Finally, the pig was prepared, the cavity filled with hot lava rocks, and it was in the ground under piles of ti and banana leaves, a heavy canvas tarp … and dirt.
By this time, the Hawaiian kid was lying in the shade of a tree with a cold beer in his hand and a couple of empty bottles beside him. The anthropologist stopped scribbling and said, “But how do you know when the pig is done?”
The young man leaned back on one elbow, took a long pull from his beer, and said, “Afta we dig da hole, we fix da peeg, put ‘um in da hole, an’ covah da buggah up. Nex’ we lie down in da shade like dis and we drink one six pack of cold beers.”
The kid paused a minute and eyed the anthropologist who was again busily taking notes.
“Den we take a nap,” he said. “An’ when we wake up, da peeg is done!” And he lay back and closed his eyes.

And that was the realluau!