Amtrak Has Lots of Choices for a Cross Country Train Ride.

Jim Loomis December 02, 2013 All Posts, Amtrak, Hawaii, Long-Distance Trains, Most Scenic Train Rides, National Association of Railroad Passengers, Train Travel Advice 5 Comments
Planning an extended rail journey is always interesting and fun. At least it is for me. There are several factors to consider: cost is a big one, of course, and the choice of routes is always a consideration because some are more scenic than others. Amtrak long-distance trains can be late – sometimes very late – so if a change of trains is involved, you have to decide if you can make the connection or if it would be safer to spend the night and take the second train the following day. 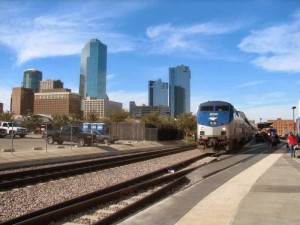 Texas Eagle ready to depart Fort Worth
At the moment, I’m working out details for a trip this coming April when I’ll be heading to Washington for a meeting of the National Association of Railroad Passengers. As usual, I’ll be flying from my home here on Maui to Los Angeles and taking Amtrak across the country from there. So the fun question becomes, how do I get from LA to Washington by Amtrak?
Leaving directly from LA there are several choices: the Sunset Limited to New Orleans, continuing from there on the Crescent to Washington; or the Southwest Chief connecting in Chicago with either the Capital Limited or the Cardinal.
If you don’t mind adding a day (and I don’t), you can take the Coast Starlight up to the Bay Area, spend the night there and get aboard the California Zephyr to Chicago the next morning.
Here’s another option: Instead of taking American Airlines to Los Angeles, I could fly non-stop to Seattle on Hawaiian Airlines and take the Empire Builder from there to Chicago.
All excellent trains. All scenic routes. And I’ve done them all in the past several years.

The one train I haven’t taken from Los Angeles all the way through to Chicago is the Texas Eagle. Two years ago, I took the Eagle from Fort Worth up to Chicago, but I’ve never been aboard for its entire route … which, by the way, is the longest of any Amtrak train: three nights and 2728 miles.
So … Book ‘um, Danno!
As an aside, I really wish I had thought to add up all of my Amtrak miles starting with the first ride more than 25 years ago. By now, it would be a bunch! I’ll do some rough calculations and let you know.

Previous Amtrak Car Attendants Have Seen It All!
NextCome to Hawaii and Go to a Real Luau … If You Can Find One.