Jim Loomis August 01, 2013 Hawaii 0 Comment
Tropical Storm Flossie came and went the other day and we were damn glad to see her leave. As storms here in Hawaii go, she wasn’t much. But don’t tell that to Uilani Endo, who lives in Kahului here on Maui. A bolt of lightening punched a hole in her roof, busted up her bathroom, and scared the poi out of her. Flossie was more than enough trouble for Uilani, thank you very much!
Flossie was predicted to come ashore on Maui at about 2:00 on Monday afternoon. When she finally arrived at 5:30, the high winds we were worried about never really materialized. There were some pretty strong gusts, though, and along with those came torrential rain accompanied by window-rattling thunder claps and vicious forked lightening. A utility pole just up the street from us was hit and knocked out our electricity, phone and internet connection all at once. A trifecta. 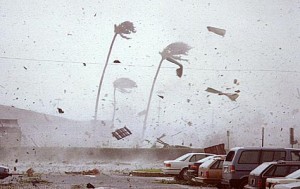 Still, compared to big storms of the past. Flossie was a pussycat. In September of 1992, Hurricane Iniki brushed Oahu and smacked the Island of Kauai head on. It’s hard to imagine the devastation. The Director of Public Works there told me that in three hours Iniki generated 30 years worth of trash.  No one really knows how strong the winds were because all the meteorological equipment blew down. Best guess: 200 mph … plus. Friends of ours spent the worst part of the storm huddled in their bathtub desperately trying to cover themselves with the bathroom door as their house blew down around them. 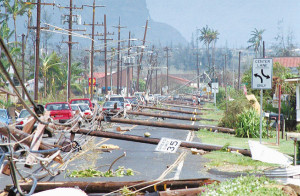 Power was out for days, and for many months following the storm, power and phone lines were temporarily strung from coconut trees. After all, you can’t just pick up the phone, order 11,000 utility poles, and have them delivered the next day … especially when you’re on an island 2,500 miles out in the middle of the Pacific Ocean.
That was more than 20 years ago and there are very few reminders left of Iniki’s visit. The famous and much-loved Coco Palms Resort in Wailua on Kauai was badly damaged and has never reopened. It’s still sitting there, a sad reminder of the power of that monster storm.
And there are the chickens. Lots of people on Kauai kept chickens in flimsy little coops in their backyards. The storm tore those chicken coops to pieces and blew those birds all over the place. Most of them survived in the wild and today there are thousands of chickens running loose all over the island. Not many people are able to sleep in on a Kauai morning. It’s all the damn roosters.

Previous An Important Call to Action from NARP.
NextGoogle Is Out To Get Me. No … Really. I’m Serious.