Mica, you see, is out to get Amtrak and he uses his bully pulpit to disparage the railroad every chance he gets. Unfortunately, as the powerful chair of the House Transportation and Infrastructure Committee, Mica gets a lot of chances.

Today, Mica’s committee held the first of several hearings all devoted to Amtrak … or, more specifically, to all of the railroad’s failings, real or imagined. 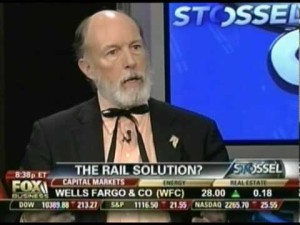 This is Randall O’Toole from the Cato Institute, a Libertarian “think tank”. Evidently, John Mica considers him a transportation expert because O’Toole was one of the witnesses Mica invited to appear before his committee today. And, in kind of a perverse way, O’Toole stole the show.

In his testimony, and through the questioning that followed, O’Toole said he was against any government subsidy for all public transportation. That’s preposterous, of course, because it would mean – giving one example – that subway and bus fares for municipal transit systems all over the country would probably triple overnight. Air fares would increase substantially and, of course, Amtrak would be out of business.

But this was the real jaw-dropper: O’Toole said the federal government should privatize America’s air space.

Yeah, he really did. So tell me: How would you like to be flying across the country knowing the air traffic controllers were being paid by a private company that was perhaps cutting a few corners in order to generate a nice quarterly dividend for their stockholders?

What the hell is Congressman Mica thinking?

Previous Long-Distance Trains: “Mobility Machines”
NextSorry about all those snakes, Guam. But let’s keep them there!