Sorry about all those snakes, Guam. But let’s keep them there!

Jim Loomis September 23, 2012 Hawaii 0 Comment
I’ve written about the brown tree snake before. It was accidentally introduced to Guam after World War Two and its population has increased out of control over the years.

The snake is mildly poisonous, and its bite is rarely fatal for an adult. But it can be life-threatening when one crawls into a crib and bites a child. 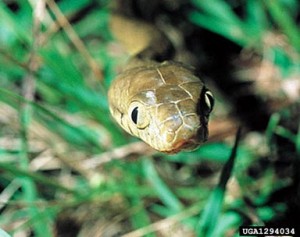 The snakes crawl up utility poles and short out the power, causing neighborhood outages. As anyone from Guam will tell you, there are small power failures on the island almost every day.

And, sadly, there are almost no birds left on Guam because these awful snakes slither up trees and eat the birds’ eggs.

That’s the reason there is now another problem on Guam attributable to the brown tree snake: a growing infestation of spiders. The birds, you see, ate the spiders and because there are so few birds left … Well, you get the idea.

In Hawaii, we’re all concerned that one of these days this damn snake will show up here in the wheel well of a jet or in a container off of a freighter. Agricultural inspectors check everything coming from Guam, but every year or so, budget cuts threaten to reduce the number of these inspectors because the chair of some committee in Congress says “we can’t afford them”.

What’s my point? I guess it’s just that there are a lot of times when we need “government in our lives”.