A Few Items of Interest for Rail Travel Fans 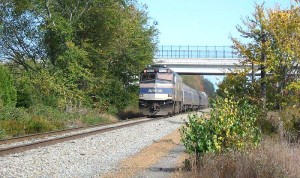 The first item today is about Amtrak’s Downeaster. If there is a better example of public demand for rail transportation, I can’t think of it. About a dozen years ago, people in several New England states started pressing for a train that would run north from Boston and up into Maine. After a decade of badgering elected officials, the Downeaster service began, running a bit over 100 miles from Boston’s North Station to Portland, Maine, and making several round trips a day. Ridership increased steadily and communities north of Portland began asking for service to be extended up their way. And so, beginning November 1st, the Downeaster will add another 25 or so miles to its route and begin serving Freeport and Brunswick. How can politicians continue to deliberately starve passenger rail in the face of success stories like this? 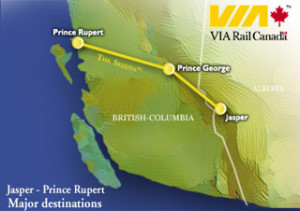 Next, I’m going to be taking advantage of a very nice feature offered by VIA Rail to compensate passengers for late arrivals. On our recent rail excursion through Western Canada, our train, the Skeena, was a bit over two hours late into Prince Rupert, BC. That means I’ll get a credit applied to my next VIA trip equal to one half the fare I paid for the Jasper-to-Prince Rupert trip … in this case, that means a $214 discount on a trans-Canada journey next April. Excellent customer relations!

Here’s something about Julie, the “Virtual Agent” who first answers when you call Amtrak’s main reservations number, 1-800-USA-RAIL. I usually don’t like trying to converse with an automated voice, but must admit that Julie is a cut above the norm. She can cover a wide range of topics and in a surprisingly natural voice. But Amtrak has just launched an “Ask Julie” feature on its web site that takes this whole concept to another level. Type in a question and Julie gives you the answer … or, I should say, she speaks the answer. She doesn’t score 100 percent, but it’s quite a remarkable feature. Check it out. Click on the “Ask Julie” box at the top of the Amtrak Home Page.

And then there’s New York City’s mayor, Michael Bloomberg, who gets our award for asking the “Question of the Week.”

Finally, wouldn’t you think someone who uses their blog to trash “Amtrack” would know how to spell Amtrak? (Well, no, actually … probably not.)

Previous Sorry about all those snakes, Guam. But let’s keep them there!
NextHow Does Rail Travel in the U.S. Stack Up with the Rest of the World?