Amtrak on-board crews are tops … and funny, too!

I wish I had kept track of all my Amtrak journeys. It would be fun to know how many times, for instance, I have ridden the Empire Builder between Seattle and Chicago. Or how many total miles I’ve logged.

What I can tell you is that, except on very rare occasions, I have been tremendously impressed by the people who make up the on board service crews – the car attendants and dining and lounge car staffs. It’s a tough job, especially on the two-night trips. The California Zephyr, for example, leaves Chicago every day at 2:00 p.m. and gets to Emeryville, California (across the bay from San Francisco), just after 4:00 p.m. two days later. 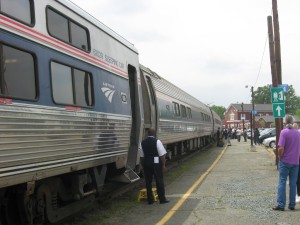 Car attendants are pretty much on call around the clock and frequently don’t get a lot of sleep, what with passengers leaving or boarding the train at stops that come along during the wee hours. Then there are all those berths to be made up … a Viewliner (photo above) accommodates up to 30 people and there are over 40 in a Superliner sleeper if the car is full. 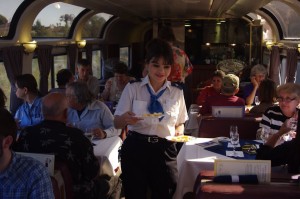 Dining car crews start serving breakfast at 6:30 and the last sitting for dinner often doesn’t finish up until 9:00 p.m. or even later. Attendants in lounge cars or in the Pacific Parlour Cars on the Coast Starlight (above photo) have an equally long day.
Furthermore, those trips are all “turn-arounds” for the crews. For instance, a Chicago-based crew will work the two-day, two night trip to Los Angeles on the Southwest Chief, spend one night in a hotel, then do it all in reverse back home. It can be an exhausting grind, but there is an up-side: typically, they’ll get five or six days off before their next trip.

Another plus is that they all – every single one of them – have some hysterically funny stories to tell. One car attendant told me about a young couple – newlyweds – who were disappointed and upset to discover that their bedroom on the California Zephyr did not include a fireplace.

And I recently heard from another car attendant who said he once had a seriously overweight woman passenger who became stuck trying to get through the door of her roomette and demanded he give her a push. Probably wisely, he declined.

That same attendant also wrote about another female passenger he encountered on a recent trip – he described her as “blond” – who asked him if the train had cable on board.

Evidently, he was able to keep a straight face, because the women then asked, “What happens after two miles?”

He said, “The cable pops out at the back of the train.”
See what I mean? You just can’t make up stuff like that!