One of the things I enjoy about train travel is being able to see and spend time in some wonderful railroad stations. They come in all sizes and shapes, of course, but the ones that are done right are a hub for all kinds of activity – commercial, residential and everything in between. 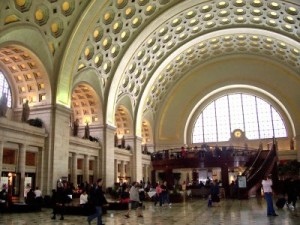 I think the two stations I enjoy most in this country are at opposite ends of the country. Union Station in Washington, DC, is simply magnificent. The main hall is vast, with an arched ceiling high overhead and larger-than-life statuary lining the walls, also high above ground level. There are shops and three or four restaurants, several of which feature seating right out on the main floor that provides wonderful people-watching for patrons. On the lower level there is a food court with every conceivable variety of ethnic food. 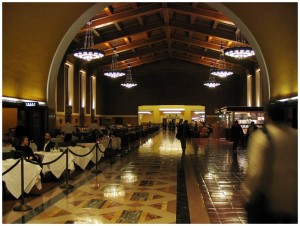 Back on the West Coast, Los Angeles Union Station is completely different but no less magnificent. Dating back to the late 1930s, it has been called the “last of the great railway stations built in the US”. No argument from me! Stand off to a corner of the waiting room, or in one of the adjacent garden areas, and you fully expect to see Errol Flynn or Greta Garbo passing through, having just arrived on the Super Chief from Chicago. 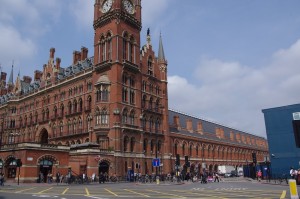 Of course, Europe has more than its (not “it’s” … I really do know better!) share of wonderful train stations. This past August, I boarded the Eurostar to Brussels at London’s Saint Pancras station on my way to Berlin. It’s a 19th century building on the outside … 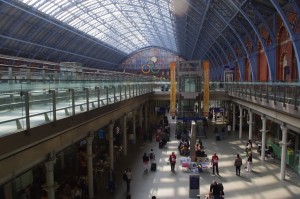 … but strictly a modern transportation facility on the inside.

In the next post, I’ll dredge up some other photos of stations I passed through on my trip, including the incredible hauptbahnhof or main train station in Berlin.