I was certainly impressed by several of the train stations I had occasion to see during my extensive trip across Europe and Asia last August. As is the case in the U.S., they ranged from large (make that huge) to small, classic to modern, spotlessly clean to … well, not so. 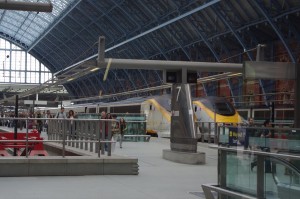 As noted in my last post, my journey began on a Eurostar high-speed train that left from an upper level of London’s classic Saint Pancras station, a Victorian marvel dating back to 1868. On my previous trip to London, Eurostar trains all departed from Waterloo station and the journey from there to the chunnel was at relatively slow speeds over track shared with trains running at conventional speeds. Not so any more. It’s a high-speed run all the way.

I changed trains in Brussels and again in Cologne (above) where I boarded this German ICE train bound for Berlin. Neither station appeared to be anything special. Ah, but then we arrived in Berlin at the hauptbahnhof, the city’s main station. Wow! 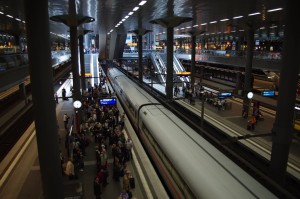 My train arrived at the lower level where there are 10 tracks and regional and commuter trains constantly coming and going. Two long escalator rides take you to past the second level, crowded with brightly lit shops and restaurants, to the street where you can step aboard city buses or, in my case, hail a taxi for the ride to your hotel. 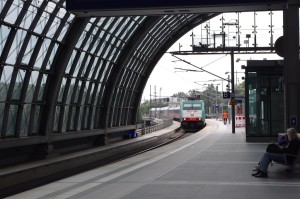 Two days later, I returned to the hauptbahnhof for my overnight train to Moscow. (Here it comes now!) It arrived on yet another level, one more escalator ride above the street. Everything open and spacious, plenty of signs to point you in the right direction.

A confession: When I walked into the Berlin station, I headed straight to the information counter which is opposite the main entrance and staffed with several bright young people. I approached an attractive uniformed young woman to get directions to track 12 on which my Moscow train would be arriving. Trying not to take anything for granted, I opened in my very best, but very basic German: “Sprechen sie English, bitte?”

She stared at me, clearly astonished, and replied in perfect English: “Of course!!”

Duh! It was not my finest moment.