The ride from Winnipeg up to Churchill – some 1050 miles and almost due north – takes almost two days. We left Winnipeg at noon on a Sunday and arrived in Churchill the following Tuesday morning. 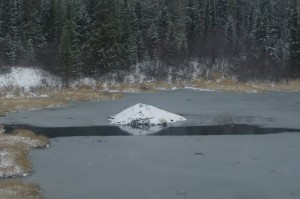 First impression of the scenery along the way — pretty bleak, mostly flat terrain with scrubby trees that got shorter and shorter the farther north we went. Still it was interesting, and certainly different, as we passed through little towns between long stretches of wilderness that was frequently broken up by streams and small lakes crusting over with ice, most of which were dominated by domed beaver lodges. 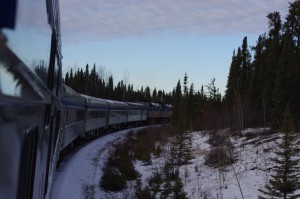 VIA Rail train # 693 rattled along at a respectable speed for the first day, but by the following afternoon would occasionally slow to a crawl over stretches of track where the roadbed was spongy because of the permafrost ground softening.

Nevertheless, we arrived right on schedule, bright and early on the second morning. Well, not “bright” exactly, since the sun never appeared through the sodden low overcast and it wasn’t until well after 8:30 that the darkness had fully lifted. 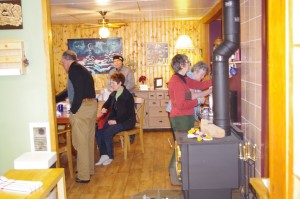 The warmth came the moment I stepped in Bluesky Bed & Sled, a bed and breakfast establishment run by Jenafor Azure. This is their busiest time with guests coming and going on a daily basis and Jenafor’s mother, known only as “Grandma” to guests throughout their stays, had come from Alberta the week before to pitch in.

For the balance of the morning I wandered around town a bit, then drove over to the Churchill Northern Studies Center about 20 kilometers away to chat with Mike Goodyear, the executive director. More on that meeting in a few days.

Tomorrow I’ll watch Jenafor’s husband, Gerald, hook up his dog team and take visitors and guests on a wild ride in a dog cart, and the following day I’ll be on a tundra buggy out in the surrounding countryside in search of polar bears … which is why all us shivering tourists are here in the first place.

The big question on everyone’s lips: We’ve come this far and we’re so damn cold … but will we see bears?

Previous James MacArthur, 1937-2010
NextThe Running of the … Dogs, in Churchill