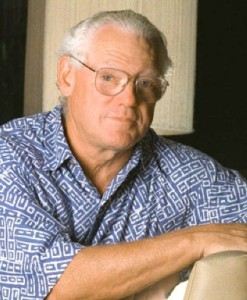 I turned on the computer this morning and came across a news item reporting the death of actor James MacArthur.

Years ago, when Hawaii 5-0 was being shot in and around Honolulu, I got to know Jimmy. His wife and mine were friends and we all hung out a bit together.

I had just started a small advertising agency and one of our clients was a very small bank. Just two branches. Nevertheless they had aspirations for expansion and we decided to produce a couple of 30-second television spots. I approached Jimmy to see if he would appear as the bank’s spokesman in the commercials. He agreed, as a personal favor to me, of course – he certainly didn’t need the money – and he showed up spot on time early one Saturday morning when the two branches were closed and we could do our production without disrupting things.

We shot one commercial at the downtown branch of the bank that morning, and moved on to the other branch that afternoon. Through it all, Jimmy MacArthur cheerfully endured all the re-takes and other delays for sound checks and lighting changes, apologized when he fluffed a line and chatted amiably with the crew during the catered lunch. He was, in a word, the consummate professional and a joy to be around.

We finally finished shooting at 3:30 that afternoon, and his wife came to pick him up. That’s when I learned that Jimmy had been skiing in Colorado the week before and, thanks to some bad weather throughout that whole area, had only arrived back in Honolulu at 5:00 that very morning. He had had just enough time to run home directly from the airport, shower and shave, and get to the bank for the filming of our two insignificant little commercials.

Ever since, whenever I read about the petulant, selfish, thoughtless behavior of some of these prima donnas in sports or theater or business, I think of James Gordon MacArthur … who shames them all.