Ridin’ On The City of New Orleans …

With the major chunk of flying happily and safely behind me, I showed up yesterday noon at the New Orleans Amtrak Station waiting to board the City of New Orleans for the first segment of what will eventually be a seven-leg rail itinerary.

We got off to a less-than-promising start when, exactly at our scheduled 1:45 departure time, a conductor announced that one of the Superliner coaches had a mechanical problem. It would have to be left behind and a replacement car substituted … begging the question, how is it that the problem wasn’t discovered until right at departure time?? At any rate, there followed some 55 minutes of trundling off to the yard and a lot of backing and forthing while the swapping out took place. 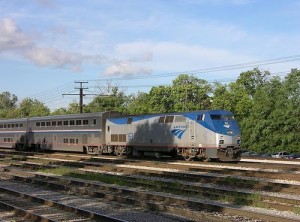 Finally we were off, however … an hour late, but it’s hard not to begin an overnight train ride on a beautiful day after spending some time in the French Quarter of that extraordinary city.

After skirting Lake Ponchartrain, Amtrak’s train # 58 entered a long sweeping right turn and headed due north across Louisiana, Mississippi, through Memphis in the late evening, and on up into Illinois … about 98 percent of which is rural farming country with gravel or dirt roads crossing the tracks at intervals of two or three every mile. 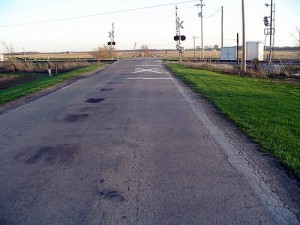 The net result was the train whistle blowing almost constantly throughout most of the journey and damn near all night. Since my sleeping car was second in the consist, the whistle was not only constant, it was loud. Nevertheless, after several hours, although well after midnight, I did indeed drift off.
Earlier I had another enjoyable dining car meal, by the way — crab cakes, rice and green beans, all quite tasty and accompanied by a half-bottle of a decent chardonay — but featuring a delightful conversation with a 60ish couple from Mississippi on the way to visit their daughter in Lake Tahoe. They connected today here in Chicago with the California Zephyr. It’s their first long-distance train ride and both were having the time of their lives and vowing more train travel in the years ahead. 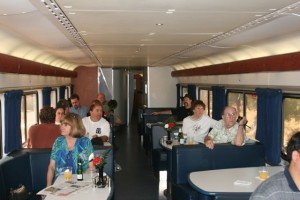 By the way, the City of New Orleans features the Cross Country Cafe car as a diner and once again I must note that this re-designed arrangement was not a good idea. It may be attractive in appearance, but the seating is not comfortable for passengers. There is really no possible way four people can sit and dine comfortably at the so-called “table for four” shown here at the left of the photo. There simply is not enough room and the Amtrak service crews don’t even bother seating four people in those booths unless they’re all from one family, preferably including smaller kids.
Further, when sitting comfortably all the way back in the booths, most people of normal size find themselves a bit too far from the tables, which are fixed to the floor. And, of course, the booth seating cannot be moved. I suppose the extra few inches could have been added to accommodate patrons who are, shall we say, “circumferentially challenged” — and there are, God knows, plenty of them — but if so the result is that dining in the Cross Country Cafe car is a bit awkward for the rest of us.
And, finally, the dining car crews don’t like this new arrangement because they can’t serve as many people in each sitting … which means there are more sittings … which means an already long day becomes even longer for those folks.
I have an idea: Let’s find the guy who designed this new configuration, and the two or three Amtrak execs who approved it, and make them ride the City of New Orleans and the Capitol Limited back and forth non-stop a dozen times. The could bring back the traditional dining car to those trains in double-quick time!
All that said, the trip was fine and, while we made up time lost in New Orleans, severe windstorms in the wee hours brought down power lines and ultimately caused us to the 90 minutes late into Chicago this morning. Not a big deal … in fact, it meant time for a more leisurely breakfast and a shorter connection to the Zephyr for those Mississippi folks.
See? That’s why I keep saying that the train is the only civilized way to travel left for us.
Sorry! For whatever reason, blogger will not let me created spaces between these last several paragraphs. The result is a visual mess, for which I apologize. Anyone know how to work around this problem??

Previous South to North to East to West … All By Amtrak
NextHow About A Hotel Review?