How About A Hotel Review?

I’m in Washington after taking the overnight ride on the Capitol Limited from Chicago. The night I spent there was at the “W” hotel in downtown Chicago … a hotel which is, I think, worthy of a word or two.

The first that leaps to mind is “ridiculous.”

Like the Cross Country Café cars mentioned in my previous post, I’m sure Chicago’s W made some interior designer all goose-bumpy because the people who run the W chain (It’s part of the Starwood brand), evidently gave him or her carte blanche. 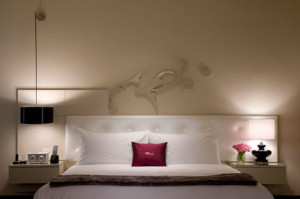 The rooms – mine, anyway – are also very contemporary in appearance, but disfunctional. The bathroom, for example, features a small stainless steel basin set in a faux marble counter that is absurdly small … so small that my toiletry kit won’t fit on it. I’d set it on a nearby shelf, of course, but there isn’t one. So anyone using the sink – even the youthful, hip travelers for whom this place was clearly designed – will have to repeatedly bend over to retrieve razor or toothpaste or floss or vitamins or whatever from toiletry kits on the floor.

The queen bed is quite comfortable and comes with four thick soft pillows. Very nice. But can anyone explain the purpose of an 18-inch wide, 8-foot long piece of fake gray fur draped across the foot of the bed? In the middle of the bed is a small burgundy throw pillow, embroidered with the word “Wish.”

Mounted on the wall directly opposite the foot of the bed is a 2×3-foot back-lit sign:

Personally, that’s the spot where I would have put the wide screen TV, which is mounted six or seven feet to the left, requiring anyone lying in bed to hold the remote high in the air and off to the side when changing channels. But what do I know?

The relentless drive for hipness extends beyond the purely visual. For example, if you have a question, apparently about anything at all, you have merely to press a button on the telephone marked, “Whatever/Whenever.” I gave it a try.

Me (pushing button)
Female voice (crisply, after several rings): “Whatever, whenever.”
Me: “Yes, can you tell me when check-out time is?”
Female voice: “Twelve o’clock noon, sir.”
Me: “Thank you.”

I suppose that wasn’t a particularly severe test of the “whatever” promise, but it was information I needed. There was, you see, no mention of check-out time in the informational booklet – titled “Know It All” – provided in the desk drawer.