A Little Bragging On Hawaii’s Very Own Airline

For my recent trip to Australia, I flew down to Sydney and back on Hawaiian Airlines. As always, a very nice trip … excellent crew and very good service (which included real meals!), all on board my personal favorite wide-body aircraft, the Boeing 767. 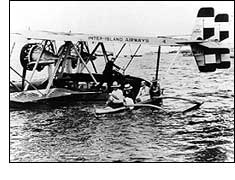 Hawaiian started flying inter-island here in 1929 with a couple of Sikorsky sea planes. In some instances, passengers were paddled back and forth from plane to shore in outrigger canoes. 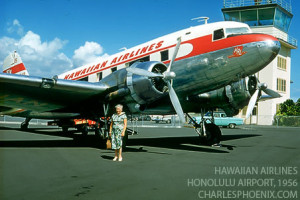 Back in the early 60s, I remember flying in a vintage Hawaiian Airlines DC-3 from Maui’s main airport to Hana, a small town on the far side of this island. It was a unique experience because we cruised along the Maui coastline at not more than 1500 feet and the plane had been modified to provide a magnificent view through large rectangular picture windows. (You can just make them out in this old photo.)

By the way, the airline code for Maui’s Kahului Airport is OGG in honor of an old-time Hawaiian Airlines pilot named Hogg.

I also happened to be on Hawaiian Airlines – as I recall, it was from Honolulu to the Island of Moloka’i — when a jubilant flight attendant announced that it was the first time an American commercial airline was flown by an all-female crew: captain, first officer and two flight attendants. 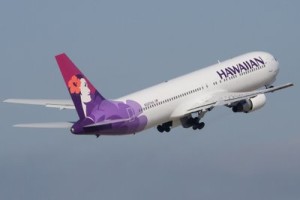 Yes, I will admit to being an enthusiastic booster of Hawaiian Airlines. No doubt there’s a measure of parochial pride involved and I will also note for the record that my brother-in-law works for Hawaiian. But I am not alone in my admiration. The airline has received multiple recognitions for on-time performance and for its in-flight service. So if you’re thinking about coming to visit us from any one of a half dozen or so mainland cities along the west coast, give Hawaiian Airlines a try.