Photo Recap – All Good Things Come To An End

It’s a recurring phenomenon with me: a feeling of melancholy during the last few hours of any long distance train journey. It’s happening again as I finish a last drink in the lounge car and shake hands with two of my fellow passengers in case we miss each other on the platform. In less than two hours, the Ghan will conclude this amazing and unforgettable 1851-mile journey that bisected Australia from north to south, from tropical Darwin through Katherine and Alice Springs to temperate Adelaide. 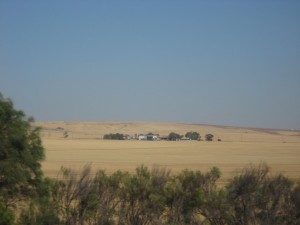 We left the harsh desert during the wee hours and, at the moment, are passing through broad fields from which wheat has recently been harvested. There’s been a terrible heat wave here over the past several weeks, but that appears to be over. The Train Manager reports that the temperature in Adelaide will be warm but comfortable when we arrive just after 1:00 p.m. 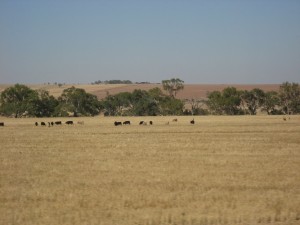 This is also cattle country … and sheep. In fact this area north of Adelaide reminds me a lot of the countryside seen as Amtrak’s California Zephyr, which runs daily between Chicago and the Bay Area in California, passes through Nebraska and Eastern Colorado. 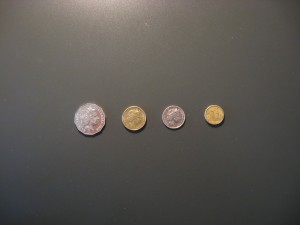 Before I forget, there are some things about Australia that take some getting used to. Take, for example, these four coins, the values for which are (left to right) 50 cents, one dollar, 10 cents and two dollars! I joked about it with an Australian back on the Indian Pacific, who pointed out that our dime is half the size of our nickel, but worth twice as much. He even knew about the one dollar Susan B. Anthony coin which we Americans kept confusing with quarters before giving up on it entirely. So, on second thought, never mind! 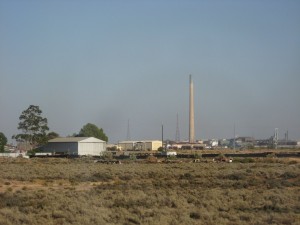 The Ghan rolls through a long slow arc around the town of Port Pirie. There’s a smelter operating here and the principal feature of the company — in fact, of the whole town — is the smokestack. That sucker is 200 meters high … or 656 feet for the metrically challenged. 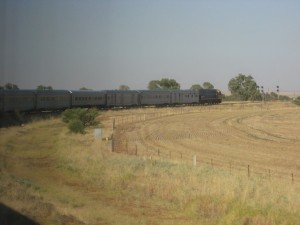 The Ghan is still traveling through farmland, but moving at an easy pace as we pass residential communities that are coming more frequently. Adelaide is up ahead on the horizon and in less than 30 minutes, the second and last of these two extraordinary rail journeys will be over.

Tonight I’ll be in Adelaide – a city I would love to revisit – and tomorrow I’m off to Sydney via Qantas and a performance of Mozart’s The Magic Flute at their magnificent Opera House. What better way to spend my final night in Australia? Then, after an overnight flight to Honolulu on Hawaiian Airlines, I connect with one of Hawaiian’s inter-island flights for the fast 22-minute hop back home to Maui. 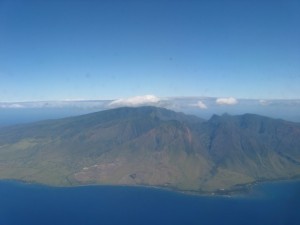 I’ve been away for only 15 days, and I thoroughly enjoyed my travels crisscrossing Australia by train. But every time I return and see this place again, I get a lump in my throat. These eight islands are all uniquely and quite different, but Maui is special. The locals say Maui no ka oe … Maui is the best … and it’s hard to argue that. In fact, go ahead … click on this photo and tell me I’m wrong!