The night before my flight up to Darwin, as I arrange a wake-up call, the woman at the hotel’s front desk says 30 minutes will be plenty of time to allow for the check-in. Well, as a veteran traveler, I know better and this morning I arrive at the Perth airport nearly two hours before my flight is due to depart … 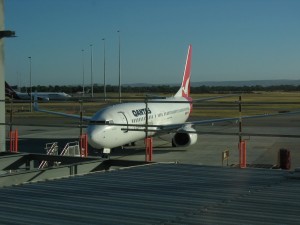 … and end up cooling my heels for well over an hour. She was right: It took exactly 23 minutes to get my boarding pass, check my one small bag and go through security. Qantas, and the airport authorities here, really have their act together. By the way – and I may have mentioned this before – I have learned that Qantas is an acronym for Queensland And Northern Territory Aerial Services, which explains after all these years of wondering, why there is no “U”. 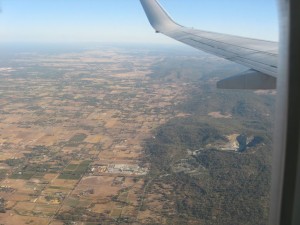 For 15 or 20 minutes after taking off from Perth on the way to Darwin, we pass over farmlands that look for all the world like much of the mid-western U.S. Darwin is close to the equator and will be very tropical, but everything in between is Australia’s vast central desert – barren red earth, scorched by a blazing sun, and virtually uninhabitable. 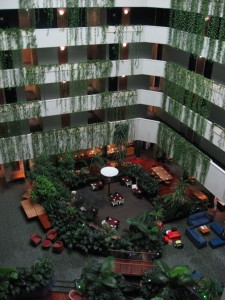 Darwin is at the far other end of the spectrum from ‘dry’. It’s overcast today with heavy rain off and on, but still very warm. The Novotel hotel has five floors of guestrooms surrounding an atrium with a central air condition system that manages to keep the staggering humidity at bay … but just barely. By the way, this town was repeatedly bombed by the Japanese during World War II. 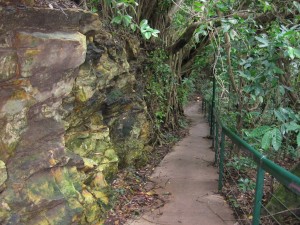 And about that humidity … My goodness, a stroll into the park just the across the street is enough to break a sweat and following a narrow walkway down through the thick, steaming foliage to the beach starts me perspiring profusely. 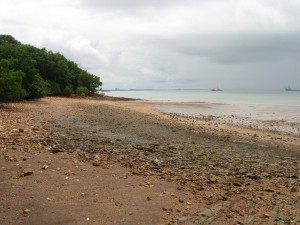 I’m sure there must be classic sandy beaches around here, but this sure ain’t one of them! And there’s not likely to be one in my immediate future since we’ll have a tropical downpour for the rest of the day and I’m going to be off tomorrow morning on my second rail journey. Oh well, I can always hole up in the hotel restaurant where smoked crocodile is featured on the menu.
Tomorrow: Aboard the legendary Ghan, south to “a town called Alice” and on to Adelaide.