Photo Recap – A Fond If Soggy Farewell to Darwin

Here’s a departure from the norm: Darwin’s train station is a 30 minute taxi ride out of town, well beyond the airport. And when I get there, the rain is coming down in sheets … so hard that Great Southern Railway, operators of The Ghan, have buses there to take us from the terminal itself directly to our respective railway carriages. 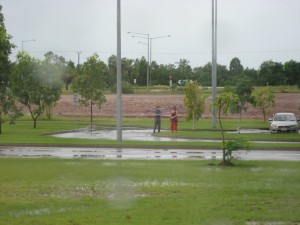 In fact, when the bus stops and opens its door, the steps into my carriage are directly opposite. Step off the bus, step on the platform, step up into carriage “H”. Is that service, or what! Once loaded, the Ghan gets underway, rolling past a couple of hardy souls braving the torrents to wave good-bye to a departing relative. 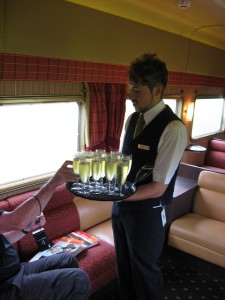 The on-board newsletter announces a 10:00 a.m. departure from Darwin and, by a happy coincidence, that’s also when the bar in the Ghan’s lounge cars open! There’s nothing like a champagne reception to brighten up a rainy morning. (By the way, I’ve noticed that the sleepers are referred to as “carriages” but, for some reason, it’s “the lounge car” and “the dining car.” I meant to ask about that, but forgot. Anyone know the reason?) 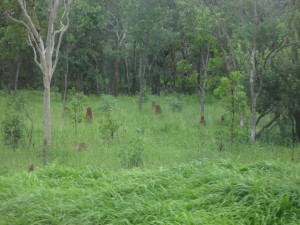 After riding through the Nullarbor Plain, it’s almost shocking to look out the window and see all of the lush vegetation. See those strange brown shapes? Termite mounds! There are billions of the little buggers out there, and they’re the reason all the cross ties (known as “sleepers” here) are concrete. Clearly, wood just won’t work. 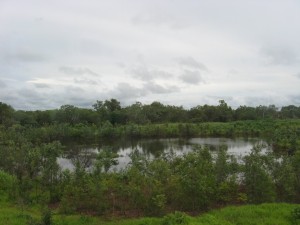 They told me I would be I would be in this part of Australia during the Wet Season, and I am certainly a believer! The ground is saturated, rivers that will be dry in six months are overflowing their banks, and what will be nothing more than low spots in October are lakes today. Haven’t seen any crocs but, says one of the crew, they are definitely out there! 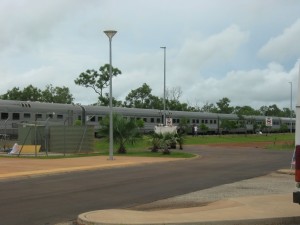 Three-and-a-half hours and 200 or so miles later, the Ghan arrives at the town of Katherine. We’ll be here for almost five hours, and it’s stopped raining, so I pile onto a van with 8 or 10 other passengers for a tour of the area. And – for me, anyway – it proves to be one of the more interesting diversions of the whole trip.

Tomorrow: Katherine and Doctors that fly and classrooms with digital students.