Yesterday I was watching a movie on one of the hundreds of channels we get from the DirecTV satellite. During one of the breaks, I was stopped by a very good commercial for CSX, one of the country’s six large freight railroads, which operates pretty much everywhere east of the Mississippi.

The commercial presented an interesting – even startling – factoid: How far, they asked, can a freight train move one ton of cargo on one gallon of fuel? 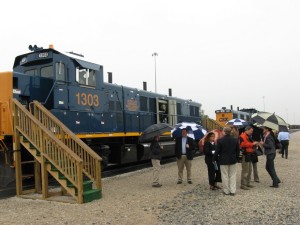 Earlier this month, I was in Chicago where I had the chance to take a tour of a CSX inter-modal yard and get a close-up look at one of their new energy efficient GenSet locomotives. (See above – and, yes, we got rained on.) These new engines can cut CO2 emissions in half and reduce particulate emissions by as much as 80 percent.

There was also time to talk about the business of moving freight with some of the CSX people. It was all informative and very interesting, of course, but I also heard something that was actually heartening: More and more shippers are turning to rail because it’s a greener way to go.

Sure, it’s often a less expensive alternative, but isn’t it nice to learn that some enlightened manufacturers are also feeling some environmental responsibility?