Obama and McCain and Where They Stand On Rail

A couple of days ago, USA Today published a story by writer Bill McGee that’s a comprehensive review of where John McCain and Barack Obama stand on transportation issues … specifically on that segment of the industry that affects the traveling public. 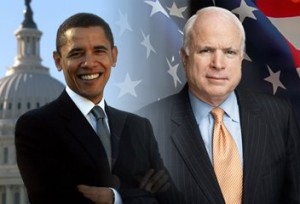 As I have mentioned on prior occasions, McCain has been an implacable foe of Amtrak during his entire Washington career. He has said that the federal government should stop helping to fund Amtrak and has proclaimed that position “non-negotiable.” As recently as last month, he was one of a small minority of senators who voted against the Passenger Rail Investment and Innovation Act of 2007, which authorized a five year commitment of funding for Amtrak. Barack Obama co-sponsored the legislation.

The entire piece is well worth reading, but here are a few selected paragraphs.

While head of the Senate Commerce Committee, McCain opposed funding for rail and singled out Amtrak as a symbol of government waste. In 2002, McCain stated: “Amtrak should be restructured to eliminate its reliance on the American taxpayers and to allow for its privatization.”

Indeed, five years ago McCain tangled with the then-president of Amtrak, David Gunn, who famously suggested that if McCain wished to cut off funding for commuter rail, the Arizona senator should do the same for commuter airlines. The McCain campaign’s website includes a section on “Reforming Our Transportation Sector,” but there is no mention whatsoever of rail.

David Johnson, deputy director of the National Association of Railroad Passengers, was quoted recently as saying: “McCain has consistently not been a supporter of Amtrak. His voting record in the Senate speaks for that.” In July, Railway Age summed up both candidates’ positions and noted the following: “In his position papers, McCain does not mention Amtrak, or any other form of intercity passenger rail service. His record indicates opposition to continued funding for Amtrak.”

Obama’s campaign site includes a lengthy section on high-speed rail, freight trains and Amtrak. The Democratic nominee supports development of high-speed rail networks across the country and “renewing the federal government’s commitment to high-speed rail.” The site states that Obama will “continue to fight for Amtrak funding and reform.” Such initiatives would seem to be in keeping with his overall goal of meeting the demands of “our short- and long-term energy challenges.”

This one issue pretty well summarizes the whole campaign for me: Obama sees the big picture and understands what needs to be done for the future; McCain stubbornly refuses to let go of his ideology in the face of today’s circumstances and offers more of the same.

At any rate, that’s the way I see it.