Earlier today I was indulging in my usual daily pastime between April and October: watching the Boston Red Sox on television via satellite.

About halfway through the game, one of the Seattle players hit a line drive into the right field corner of Fenway Park. The Red Sox outfielder, J. D. Drew, raced over and snagged the ball just a foot or so off the ground for the third out of the inning.

Then, with the crowd applauding his very good effort, Drew continued loping toward the stands and very deliberately dropped the ball into the glove of a young boy seated in the front row. The camera got a wonderful close-up of the boy – I’d judge him to be 8 or 9 years old – staring in wonderment at that baseball. The look on his face was one of pure rapture.

I can tell you from my own experience that it was a moment in that kid’s life he will never forget. Not ever. If he wasn’t already, he is now a Red Sox fan for life. Not to mention a devoted fan of J. D. Drew (shown here hitting a home run in a game last year).

On May 25, 1946, I had a similar experience, although not so dramatic. I was visiting my Aunt Bobby in Boston for that weekend and she took me to Fenway Park to see the Red Sox play the New York Yankees. 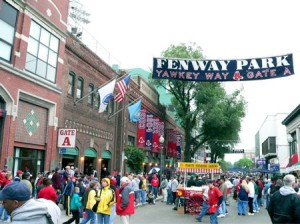 We worked our way through the teeming crowd, passed through the turnstiles and down a long concrete ramp into the bowels of the ballpark – dark, noisy, crowded – with green steel girders crisscrossing overhead.

Then up another, shorter ramp emerging, almost unexpectedly, into the sunlight with a panorama spread out before us: an immaculate, manicured green baseball field. It was perfect … the most beautiful thing I had ever seen. I was just a kid, about the same age as that boy today, but the memory is still vivid. I don’t remember details of the game, but the Red Sox won, 7 to 4 and I’ve been a Red Sox fan (and, it goes without saying, a Yankee-hater) ever since. 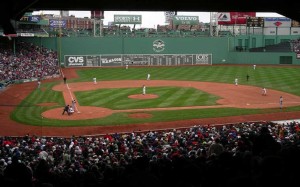 All these years later, I still go back to Fenway Park almost every summer to see the Red Sox play. I’m leaving next week, as a matter of fact. And when I go up that same ramp and catch my first good look at the field, it will be 1946 all over again. It happens every time.

Previous A Tricky Bridge Project on a Tight Schedule
NextHip-Hip-Hooray!