A Tricky Bridge Project on a Tight Schedule

The Northeast Corridor – that’s the roughly 440 miles between Washington and Boston via New York City – is Amtrak‘s busiest route. Northbound trains out of New York travel along the Connecticut shore before swinging a bit more inland at New London for the run across Rhode Island and on into Boston.

New London is where the trains cross the Thames River. For 90 years, they’ve crossed on a bridge with a section in the middle that raises to allow river traffic to pass … traffic that can range from a sail boat with a mast that’s more than 30 feet high to a nuclear submarine coming from the Electric Boat division of General Dynamics in nearby Groton, Connecticut. 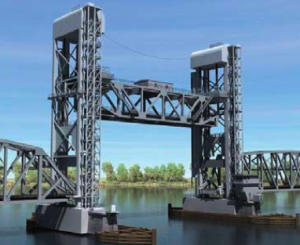 But, as I said, the bridge is 90 years old and the moveable section is now going to be replaced … a job that will take just four days!

Obviously a lot of planning and work has already gone into this project. Concrete pilings have been poured and the replacement section has been built. Still, removing the old bridge and setting and securing the new bridge in place in 96 hours will really be an impressive trick.

There’s a lot at stake, too, because Amtrak carries roughly 3,350 people every weekday across that bridge and almost that many on Saturdays and Sundays.

Nevertheless, all train traffic between New London and Boston will stop on Saturday, June 14th as the work begins and, according to Amtrak, everything will be finished by Tuesday, June 17th.

It had better be finished, because on the 19th a very important passenger is scheduled to cross that particular bridge on an Acela train en route from Washington to Boston: me!

And that kinda reminds me of a drawing by the famous World War II cartoonist, Bill Mauldin. Two GIs are hunkering down in a foxhole, cold and wet with bullets flying all around, and one says to the other, “The hell this isn’t the most important foxhole in the world. I’m in it!”