After returning to my compartment and spending an hour with a good book, I notice that the landscape is more barren now, almost desolate, with fewer trees struggling up out of the rocky ground. We are, in fact, approaching Sudbury, a town of some 160,000 people located in the middle of a large area rich in minerals, the result, some say, of a meteor-strike millions of years ago.

The first visible sign that we’re approaching Sudbury is, far in the distance, a 1250-foot high smoke stack, still standing on the site of a smelter which contaminated much of this area in the 50s and 60s.

After a 30-minute stop in Sudbury, the Canadian resumes its journey swinging more to the west now, heading across a vast expanse of level ground in the early stages of reforestation and almost directly toward the setting sun then, suddenly, plunging back into the wilderness. There are more lakes here, some just 30-40 feet across, others the size of several football fields, but all with a variety of waterfowl, which can be seen by the chevron-shaped wakes spreading out behind as they paddle across the mirrored surface. 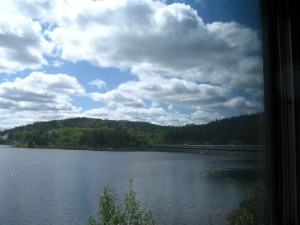 As we rumble along beside one of these lakes, I spot movement up ahead along the far shore: three yellow, silver and blue locomotives. It’s the head end of our train … 22 cars and more than a third of a mile ahead.

The length of the train causes problems en route: we often have to make 2 or 3 stops at stations with small platforms and it’s difficult in the larger towns where dining and lounge cars need to take on additional supplies, plus water for the passenger cars and fuel for the engines.

After another excellent meal in the dining car, I stroll back to my compartment, collect my toiletry kit and a towel, and walk to the head of the car for a delightful hot shower. My bed has been made up when I return and, after an hour or so with a good book, I drift off to sleep as the Canadian passes above Lake Superior.

My tablemates at breakfast the next morning are a husband and wife from Victoria, British Columbia. They’re returning from an annual month-long visit with their daughter’s family near Toronto. “This is the sixth time we’ve made this trip and we always take the train,” the woman says emphatically. “I’d much rather spend three days here than three hours in a plane.”

After breakfast, I walk up to the front of the train occupied by the coach passengers – three coaches and a dome/lounge car from which they can purchase pre-packaged meals, snacks and drinks. The coaches are for the most part occupied by younger, more budget-conscious passengers and people traveling shorter distances. Most of the sleeping car passengers, on the other hand, are older and are either traveling the entire distance or are getting off at Winnipeg or Jasper. 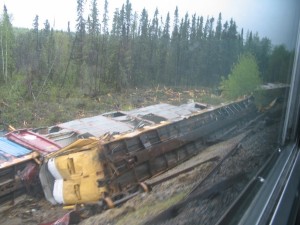 Most of the rail line on this stretch is single track, first hacked out of the wilderness in the late 1800s by chipping, chiseling and blasting through some of the hardest rock on the planet. Periodically, the Canadian pulls off onto a siding to let one of the many Canadian National Railway freights rumble past. By rights, the freights should be the ones to pull over, but in many cases they are simply too long for the sidings.

At one point, our train slows and passengers stare at the stark evidence of a recent derailment: a half dozen auto carrier cars scattered haphazardly beside the track and down a 50-foot embankment.

Previous Maybe Federal Authority SHOULD Be Stepped On!
NextVIA Sure Knows How to Say ‘Thank You’