OK … this is just too good not to share. Besides, I’m leaving on an extended trip tonight, so today will be full of last-minute preparations and packing and fretting that I’ve forgotten something.

Anyway, a few days ago, the Boston Red Sox were playing the Oakland Athletics at Fenway Park in Boston. One of the games featured the major league debut of a young pitcher who is a real rarity: Pat Venditte can pitch with either arm.

There are quite a few ballplayers who can BAT either left-handed or right-handed, but throw from either side … much less with the consistent accuracy that’s required from a big-league pitcher? Well, that’s something very unusual. The last time it happened was 20 years ago and, interestingly, it was a pitcher named Greg Harris who played for several big league teams, including the Red Sox. The thing is, while Harris COULD throw with either hand, he did it only rarely and never in crucial situations. Venditte routinely switches back and forth, throwing with his right arm to right-handed batters and going lefty against lefties.

And now for the fun part of this interesting little story, I’ll leave you with a clipping from an Oregon newspaper that ran a story about Venditte’s Fenway Park debut. The story was from the Associated Press; but the headline was provided by the local editor. Enjoy! 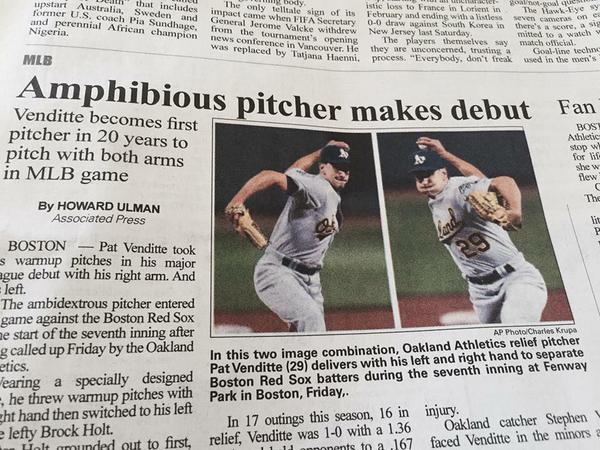 Previous What’s In Store for Train #1?
NextThe Anti-Rail Mob Is At It Again.