Sacramento to Chicago on the Zephyr: A Mixed Bag

Jim Loomis June 12, 2014 Amtrak, Long-Distance Trains, Lounge Cars, Most Scenic Train Rides 4 Comments
The California Zephyr is still Amtrak’s most scenic train ride … at least in my book. The Coast Starlight is probably my favorite Amtrak train, but much of that has to do with those wonderful parlour cars.  The Cardinal gets my vote for the most scenic eastern train … the only possible exception being the Adirondack when the fall colors are out. But, for spectacular scenery year ’round, I have to pick the Zephyr. 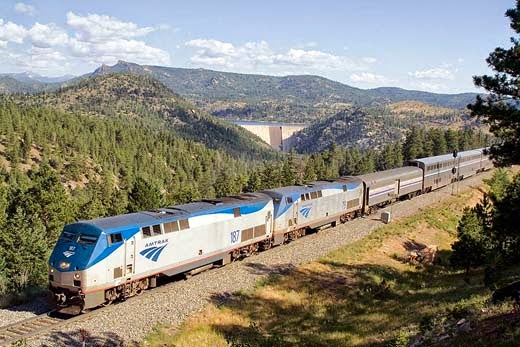 However … I have ridden that train twi e in the past six weeks and both times, I am very sorry to report, the on board crew has been lacking. Here are just a few of the unhappy details from my most event trip — Sacramento to Chicago:
Ron, the car attendant in my sleeper was superficially pleasant when he was around, but most of the time, he was invisible. He was paged three times by the conductor when passengers were trying to board his car in Roseville, California, but he was nowhere to be found … probably asleep in the dorm car. The conductor finally boarded his passengers … even helping bring their baggage aboard.
A British couple boarded in Denver — we were late, so that was about 9:00 p.m. — and again Ron was missing. They struggled trying to get the beds arranged in their big bedroom and were understandably upset when he finally appeared sometime after our departure. Instead of being apologetic, he apparently gave them some lip and the woman was still steamed the next morning when I met hem at breakfast.
That night at dinner, the server seated some 20 of us at five tables in his section of the dining car. Minutes later, he appeared with a large plastic bag filled with dinner rolls and proceeded down the aisle inviting us to reach into the bag and select our roll to accompany that evening’s meal. Several patrons politely declined. Next time through, he came with a tray loaded with a variety of drinks: iced tea, water, hot coffee, Pepsi and Sierra Mist … again, passing from table to table allowing passengers to select their own beverages. (I have never, ever seen that, especially the fiasco with the dinner rolls, in some 200,000 miles of travel on Amtrak trains!)
Furthermore, the dining car ran out of desserts during the first sitting … this, mind you, with 24 hours left in our journey. And they were almost completely out of food at lunch the following day … with another eight hours to go before were wet due into Chicago. Coach passengers were refused admittance to the diner and were told the food was being saved for sleeping car passengers. But we were offered only beef stew or a salad of some sort.
In semi-desperation, I retreated to the cafe on the lower level of the lounge car where the attendant said, apologetically, all he could offer me was “soup, soup or one orange.”
Filing a Trip Report is one of the privileges I have as a member of the board of the National Association of Railroad Passengers. This one is going to be a doozie!
That said, do I still recommend Amtrak and the California Zephyr? Absolutely!!