Jim Loomis May 07, 2014 All Posts, Amtrak, Dining Cars, Sleeping Cars 1 Comment
The ride from Boston to Chicago on the Lake Shore Limited is a pleasant one, through Springfield and then across the Berkshires. The trees have begun to leaf out and the air is fragrant with the scent of blossoms. This train usually runs full and is very popular because of convenient departure and arrival times, especially for the westbound train. For instance, you can leave Boston at noon or New York in the mid-afternoon and be in Chicago by mid-morning the next day.
All well and good, unless you live in Toledo or Cleveland, in which case the Lake Shore goes through your town in the wee hours. Hence the very logical call for a second daily train that would appeal to those major markets and no doubt prove the old adage: “Double the frequency, triple the ridership”. 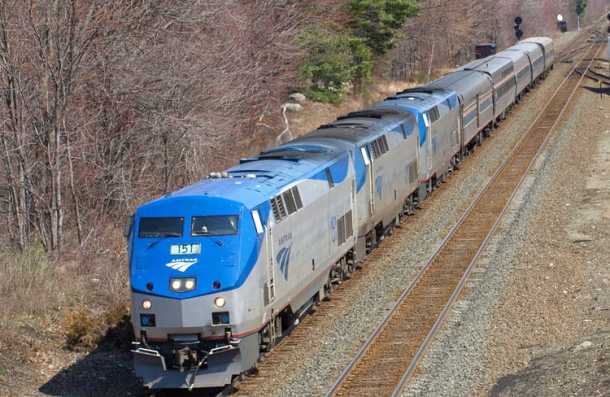 The Boston Section of the Lake Shore Limited running just west of Springfield, Mass.
The only problem I had — and it was more a minor irritant than anything else — was that my sleeper in the Boston section ended up being eight cars away from the dining car, which was in the New York section of the train. After a big Amtrak steak and a half bottle of wine, it was a long, rocky walk back to my waiting berth.
The car attendant in my sleeper out of Boston passed the acid test: as we approached Chicago, she appeared in my doorway and asked if she could take my bag up to the vestibule and have it there for me when I left the train. Interesting that the big strapping car attendant on the Chief coming east never made that offer.
In another two-plus hours, we’ll be heading back to the Galesburg station and this time I’ll be on the Zephyr for the two-night trip all the way to Davis, California. It’s a glorious ride, especially through the canyons west of Denver and over the Sierras the next day. I’ll do my best to have some photos for the next couple of posts.